“Hello,” the talk show host said facing the studio audience, “I’m Dr. Claude Zipher and welcome to another episode of ‘They Think I’m Crazy!’ The show where real people tell their real story and you, the viewer, get to decide who is right and who is CRAZY. Come on, let’s have some fun.

“My first guest is an unpublished author from Minnesota, Gary Milieu.”

Gary sat at a table on the stage. He raised a hand and waved at the studio audience.

“So, Gary, let me get this straight,” Dr. Zipher said sitting down across the table from him. “You wrote a story about an author who gets phone calls from an obsessed fan and then ends up being killed by that fan.”

“And now you’re saying you’re getting those same phone calls.”

“You’re sure this isn’t some deranged fan who’s reading your story like a script?”

“The catch is,” Gary said, “I haven’t published the story yet. I haven’t even shown it to anyone.”

“Well if this is true, why here? Why talk to me on national television? Why not go to the police? Aren’t you giving nut jobs ideas?” Dr. Zipher asked.

“I went to the police; they didn’t believe me.”

“I can’t imagine why not,” Dr. Zipher said with the deadpan delivery his show was famous for. “These calls, are they word for word what’s in your story?”

“Not quite, but they’re close. Honestly, they’re better than what I wrote.”

“So your deranged fan is a better author than you?”

The audience couldn’t hold it in any longer, many laughed out loud.

“That seems to be the case,” Gary said with discomfort.

“Do you know who this deranged fan might be?”

“But in your story, you know who it was, right?”

“I have an idea, but I haven’t gotten to the end yet.”

“And you believe the person making phone calls is somehow one and the same with the character in your story.”

“Well, it’s something of a memoir…”

The talk show host raised an eyebrow. The audience guffawed.

“Ok, your main character, how did he deal with it?”

“Well the police didn’t believe him either so he went on a talk show. Your show.”

“How did that work out for him?”

“So write a happy ending. The stalker falls off a cliff and dies. Boom. You’re done.”

“It doesn’t work like that. That’d be a terrible story.”

“So save your life and take a bath on this one. If your story’s driving it, you can find a better ending.”

“Well, that’s the problem. At every turn the true story is better than the fiction. It’s like Fate wrote a more compelling version of my life.

“For instance in my story when the author comes on stage the host is a jerk. In real life you’re still a jerk, but I love you for it.

“Then after I tell that anecdote-”

The clear SHINK of a knife being pulled from a sheath rang out. Next came sounds of a struggle, a cut off yell, and gasps of someone trying to breathe, then a shriek split the blackness. Dr. Zipher shouted and the studio audience screamed and ran, colliding in the darkness and frightening each other more.

When the lights came up the remains of the audience looked upon a terrible sight. One of the author’s hands held his own head back while the other held a bloody knife.

An autopsy later confirmed that the author had slit his own throat.

One peer review of “Deranged Fan” 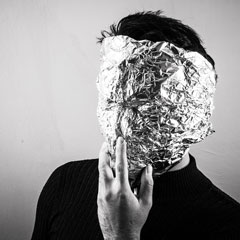 In honor of Halloween, a tale of paranoia, fear, and ego.