He kneeled down beside me at the front of the line and said, “Don’t be afraid, small one. The ride isn’t that scary. You’ll be ok.”

Through my tears I saw the red, yellow, and blue emblem on his chest.

I stopped crying and screaming. My Mom wiped away my tears. And then, without any hesitation, I went on the ride.

Superman said the roller coaster wouldn’t be scary and I believed him. I didn’t flinch when they pulled down the safety bar or when the attendant checked it with a yank or even when the coaster car pulled out of the station.

But Superman lied. That was the scariest ride I’d ever, ever been on. The heights and depths, the twists and turns and thrills terrified me. I would like to say that I nearly peed my pants, but that would be a lie.

Later, after we’d left the amusement park and gone home, I did not shy away from watching Superman cartoons, but now I always hoped Mongul or Lex Luther or Doomsday would win. I carried a piece of kryptonite around in my pocket for three years, an accessory from a play set. I wanted him to pay for the fear and terror he put me through. I wanted him to know what it felt like to be scared for your life, betrayed by the one you trusted and wondering if you’d ever make it back to warmth and safety.

Years later I came to a realization: he was just a guy in a Superman shirt, some jerk who couldn’t mind his own business.

But shortly after that realization came another. He was right. I was ok. I hadn’t died like I’d feared. I’d lived to despise him and root against him and discourage friends and random strangers from buying his merchandise and comic books.

Despite some bitterness, I really was okay. And he lived on and saved Lois Lane and defeated Mongul and Lex Luthor and even Doomsday, the alien who’d killed him. And so did I. I went to college, married a nice girl, left the kryptonite behind, and through even that terrible, scary ride, learned to conquer those roller coasters. Even the one that I thought would kill me.

In the years since those realizations. I have one regret. Not that I listened to Superman, but that I didn’t trust him enough. I let fear overshadow the strength and courage that that random guy had tried to impart. He tried to give me the world, to let me see me the heights and depths, the twists and turns and thrills, but all I saw was fear. I lived in a cage because of it, holding on to kryptonite, never soaring above the clouds, until I finally learned to trust again. 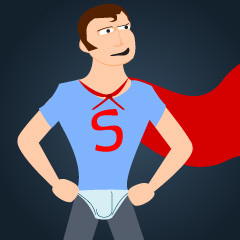 This is pure fiction except that I almost thought about being the jerk in the Superman shirt. I was wearing a Captain America shirt and nearly tried to help quiet a screaming child with my superhero inabilities.