After the train job went South, both in the direction that maglev train went and in the cash that never left it, the Wipple Gang, me, “Stank” Foreman, and Mavis Wipple went on a “cleansing fast,” least that’s what Mavis called it. Stank called it rebelling against the “Food Czar” …whoever that was. I always just called it being too broke to eat.

So we was hungry for work and for food when Mavis came to Stank and me with a plan. “I have it on good authority,” here she nodded at Stank, “that there’s whole lots a tech in Old Man Cooter’s barn. Word is that the black-market value’d be high enough to get a one-way ticket off this rock and back to a place where baths’re regular.”

“Hey, speak for your own hygene,” Stank said with a smile.

“You in particular,” Mavis said and winked at him. She pulled out a laser gun some miscreant had left by the old playground. “This should be ‘nough to stop Old Man Cooter. How much of a fight could ‘Old Man’ Cooter put up anyways?”

Mavis put the laser gun in her waist band, since she didn’t have a holster and hopped in the back of the beat up truck we’d freed from its previous owner. Stank and I hopped in beside her.

“Why ain’t one of you drivin’ the truck?” she asked.

Stank got out of the back and into the driver’s seat. He drove us out to Old Man Cooter’s property. We parked across the street from his driveway and ran toward the house. We didn’t realize it meant running a mile in the freezing cold. ‘Bout a quarter of a mile in, Stank and I were huffing and puffing and I got a stitch in my side so sharp I could’ve cut cheese with it. At a third of a mile, Stank and I both fell over.

Mavis yelled and questioned our heritage with a space sailor’s skill. That was just about the time Old Man Cooter drove up on his way to the flea market. 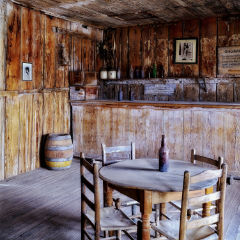