They set the ship down in a paradise untouched by humanity. White sand beaches ringed the islands of the archipelago. Blue, crystal-clear waters rolled into the beach with every wave. Palm tree like plants swayed with the breeze. It was the dream of crew members who’d been cooped up in the tiny ship for months.

Once the ship’s landing procedures had finished, Captain Schmox opened a channel to the ship. “Excellent job everyone. I know it was a long haul these last six months of terraforming watch, but you have all served well. Shore leave is granted for all personnel. Go. Have fun!”

As soon as the ship’s doors opened, the crew ran toward the water. The captain followed, enjoying her crew’s reckless abandon.

Samuel Gurg, the ship’s engineer, led the way. He barely unbuckled his greasy tool belt before plowing into the water. Bits of dirt and grime dissolved on contact. Soon Gurg had a murky grey cloud around him in the transparent water.

The first officer, the navigator, and several other members of the crew followed Gurg. They made their own smaller murky clouds as they went.

As Captain Schmox exited the ship she called out. “Hey, Gurg, how’s the water?”

He did not respond even after a repeated call. But there was distance between them and a wind had whipped up that snatched her words away.

The engineer’s uniform shirt floated on top of the water.

“Gurg, put your uniform back on,” she called mildly horrified. Then she saw the pants and couldn’t stop laughing. “Bottoms at least!”

She could see their little murky spots and splashes as she continued toward the shore. She knew where they were, but as she called and called, no answer came from anyone in the water.

Lightning cracked somewhere behind her.

She walked toward the water, yelling to whoever of her crew might listen, “Let’s go, uniforms back on!”

And then it began to rain. The droplets prickled her neck. As she reached the shore, the cook collapsed with a yelp in knee-high water. His legs looking like stumps as they flung upwards as he fell.

The rain continued to tingle as the storm carried on.

When the cook didn’t resurface, the communications officer ran in to help.

The captain’s eyes fell back on Gurg’s original, murky spot. It was gone. The water was as clear and inviting as before despite the rain.

“Everyone! Back to the ship!” Schmox yelled. Only the medical officer and two other crew members remained on the shore with her.

The rain turned to a downpour as they ran for the ship. They splashed through puddles. The water wormed its way inside their clothes, paralyzingly cool. Schmox fell to the ground. The rain continued to pound and sting. She could not raise herself. Her muscles felt weak and atrophied.

She looked up. The medical officer lay on the ground to her left. He was sinking into the sand. The other two crew members hadn’t made it much further. She tried to crawl, but couldn’t make her muscles move. The sand clung to her, hungry for her to stay. It pulled at her limbs and sucked at her clothes. She herd large thunks up ahead. Panels fell from the sides of the ship. Captain Schmox closed her eyes. The rain kept falling through the night.

In the morning, the sun shone down on a beautiful paradise untouched by humanity. 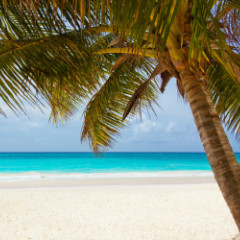