I was a year and ten paragraphs into writing my novel. She was three lattes and a cappuccino into understanding the 21st century obsession with coffee. Our eyes met across the grocery store café. The rest is mostly history… for her.

On our first date, she took me to Rome, to a gladiator match in the Colosseum. She thought I’d like the theatrics of it, and I did, but I liked her in a toga more. I wasn’t prepared for the gore of that kind of spectacle though. Throwing up all over a girl’s toga amidst a Roman mob rarely warrants a second date. For reasons I couldn’t explain, though, she stuck with me. Maybe she saw something in my future she liked.

Next she took me to a restaurant in Paris thirty years before I my birth.

She laughed. Instantly my only purpose was to make her laugh again. We ate baguettes, sipped coffee, and people watched. Her suggestion. Even with the enlightenment of time travel, our animal fascination with staring at people hadn’t changed.

On our third date, I insisted we stay in my time. I wanted to bring her into my world, to show her its depths. We ate at the grocery store café where we met and went to an avant-garde play about a man who only spoke while standing in a sandbox. She’d seen it before. Then we headed back to my place and played Parcheesi. She assured me over and over and over that she really, really enjoyed herself.

On date four she took me to the moon base where she grew up. Over a starlit dinner we watched the Earthrise and drank too much champagne—or whatever the moon equivalent was. The date was so fantastic it didn’t seem real. A girl like that never falls for a guy like me. There must be a reason. She must want something.

The fifth date had always been the test for me. If I didn’t bore the girl by date five, we had a chance at more. That I’d never made it to date six seemed immaterial. She took me to Stonehenge where we assisted in placing one of the crossbeams.

It was awesome until I saw her. Another her, standing off to the side with someone else. A not-me someone else. A man. It was only a glimpse, but by the time she dropped me at my apartment a few millennia later, I was certain of what I’d seen. 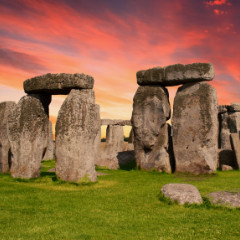