Experiment #25
Story Info
A professionally edited and fully designed version of this story appears in Story Lab Magazine Issue I. You can find it on the App Store, the Google Play Store, and the Amazon App Store

When school let out and we went to the beach for a vacation, Mr. Kringle came along. He wore an inter-tube, a snorkel, and a slathering of sunscreen wherever we went. “The beaches at the North Pole aren’t nearly so warm,” he’d mutter through his rosy-cheeked sunburn. He wasn’t nearly so jolly those two weeks, but he faced it bravely.

He passed most summer days in the wood shop. He’d worked out a deal with the local lumberyard owner to trade a few of his “wood sculptures” (as he called them to adults) for logs. And thus he kept himself readily supplied with raw materials.

Most summer nights we’d play board games, but no matter what game we played, Mr. Kringle always won. “Five hundred years of experience,” he’d say as he raked in the Monopoly cash or sent me home in Trouble or told Jamie to “Go fish.”

Before we knew it, Fall was upon us. The leaves turned vibrant oranges and brilliant yellows and luscious reds. One morning I found Mr. Kringle out on the back deck looking at the trees. He wiped tears from his eyes. “They’re just so beautiful,” he said.

Eventually Mr. Kringle’s regular calls to The Workshop spluttered to a halt, skipping a day here, then calling for a week, then skipping three days and calling five until he just stopped all together.

In early October, Ghengis got sick. The vet said he had “necrotizing pancreatitis,” which, terrible as it sounds, is treatable, but after the treatment began to work he got blood clots. One went to his brain and that was it. We all loved him, but Mr. Kringle took it hardest. He spent three whole days carving a memorial. It’s the most life-like wooden sculpture I’ve ever seen.

“Nick, what are you going to do with all these toys?” Dad asked one morning in mid November. The workshop out back was bursting at the seams and several hundred more were in storage. Mr. Kringle had taken to working eighteen hours a day in the shop. And, “to meet demand,” as he put it, he studied less and cut more quickly leaving Tim and I to sand down the rough edges. “You have so many,” Dad continued. “What are you going to do with them?”

“So many?” Mr. Kringle asked. “There aren’t even enough for the county!”

Dad stared at him, mouth open. Finally Dad threw up his hands, shook his head and went back to the house. Mr. Kringle went right back to work.

The day after Thanksgiving Mr. Kringle paused his carving long enough to help us decorate the tree and sing some Christmas carols. He somehow remembered every ornament on the tree, even the ones from when Mom was little.

He lifted Jamie up so she could put the star on top, but she was heavier than he’d expected. With a shriek and a shout they fell into the tree and brought the whole thing down on themselves. Mr. Kringle roared with laughter and Jamie after nursing a sulk for a minute couldn’t help but join in.

Mom rushed into the room from the kitchen, Christmas apron newly stained with flour and butter and chocolate. “Are you alright?” she asked. She saw the tree on the floor and Jamie and Mr. Kringle laughing in the midst of it and she burst into tears. Dad went over to comfort her. Tim grabbed a tissue, but she waved him off. “No, Timothy,” she said, “they’re tears of joy.”

As the first two weeks of December came and went, and the toy pile grew larger, but his goal grew ever more elusive, Mr. Kringle would stop his work and take long walks by himself. We never knew exactly where he went or how long he’d be gone, but he always came back in a better mood.

Christmas Eve night I had a terrible stomach bug and couldn’t go to the service with the rest of the family. Tim stayed home with me as Mom was working in the nursery and Dad was working the soundboard. Mr. Kringle was still very busy with his toy making and hadn’t left the wood shop all day. I laid down on the couch to watch a movie and Tim went up to his room to read.

Just as the movie was getting good, Mr. Kringle came in the house with Dad’s old army duffel bag over his shoulder. He stopped by the couch, set down the sack, and began rifling through it. “Normally you should be asleep when this happens,” he said, “but you’ve been very good this year.” He pulled out the memorial he’d carved for Ghengis, and handed it to me.

“It’s yours,” he said with a twinkle in his eye.

“He was the best dog,” Mr. Kringle said. He smiled.

He heaved the sack back over his shoulder. “I’ve had a lot of fun this year,” he said with uncommon gravity. “Merry Christmas!” He walked to the front door and left.

I tossed off my blankets and ran to the door. I threw it wide, somehow knowing he wasn’t coming back.

He turned back toward me with the widest smile I’ve ever seen. A light snow had begun to fall.

“Nicholas, my boy, I have to go,” he said to me. “It’s Christmas Eve.” He smiled and turned toward his mission.

“I love you, Grandpa,” I said quietly.

He turned back once more and faced me. “I love you too.” Then he shifted his bag, adjusted his cap, smiled, and walked into the night.

Dad went right back out to look for him when he got home and Mom called all of their friends and every place she could think of looking for him.

Mom’s calls turned up nothing, and it was late before Dad came home alone.

No sugar plums danced that night.

We went through our Christmas morning traditions as usual, but there always seemed to be an empty chair.

After the morning festivities Dad got dressed and went out to look for him. Before he pulled away though, Mom called him back. He held her close as she handed him a tear soaked smart phone.

He looked at it and read the news headline: Santa Shot and Killed During Home Invasion.

We had his funeral on New Year’s Eve. The service was not well attended, but the pastor prayed long and hard.

The next day the five of us loaded up the van and took turns handing out the wooden toys to kids throughout the county. It took eight full loads to give them all out.

Near the end, one little girl asked me, “Why are you doing this?”

“Mr. Kringle wanted you to have it,” I said.

She stared at me while she fingered the wooden tea set, intricately carved and delicately painted.

“He wanted to come himself, and come on Christmas, but… he wasn’t… he wasn’t able to,” I said.

“Are you one of his elves?” she asked.

“Do elves get Christmas presents too?” she asked.

As I opened my mouth, Dad interrupted. “They don’t need them,” he said, “they get the best gift of all.”

“They get to be with Santa,” he replied, “all year long.”

It has been many years since my grandfather died, but every year on Christmas Eve I leave a window open. 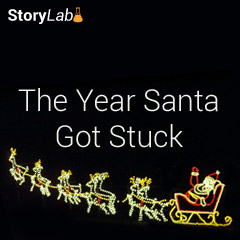 If you missed part 1 you can read them together in The Year Santa Got Stuck studies section. It’s a day late, but Merry Christmas and Happy Holidays.

Sometimes even Santa loses his way