The next morning, after a breakfast that included a variety of cheeses, baked beans and garlic, the competitors headed to their stench training. Several guys went for long runs and a few went to find the skunks as well as a population of bombardier beetles, stink bugs, and great fields of stink weed that were brought in to bring nuance and refinement to the various smells each contestant brought to the island.

My Dad decided not to go for those, call him a purist, but he felt he could only claim stenches that came from his own body, not whatever happened to be sprayed at or rubbed on himself. He started a thorough exercise routine designed by the WSC trainers to increase sweating in glands that produced greater stench. He did that for a few hours, but he told me later his heart wasn’t in it. After that he came and found me.

No contestant had ever brought anyone with them before so there was no planned activities or even space for me. When Dad found me I was poring over the trophy case of past winners, about the only thing on any of the walls of the buildings besides stains. He decided we’d go back to Mount Baconmore and check out one or two of the lesser bacon monuments. I tried to get him to think about the contest tomorrow but again he told me not to worry about it and suggested we catch the Bacon-iberty Bell too.

I had a lot of fun with him that day, but near the end, while removing the clothes pin from my nose to scratch it, I noticed that his pungency was wearing off. I tried one last time to get him back into training. After some back and forth he finally agreed, but only if I’d go with him.

We went to the gym and he worked hard on his stench. I was very proud of him. That night almost everyone went straight to bed. Only my dad and I hung out at the campfire, telling silly stories and jokes to try to make the other one laugh. After quite a few rounds we turned in too.

The next day after a stinky breakfast we all went to the contest area. Like nationals they had a row of glass boxes where the judge could come and smell each contestant independently, but this time they had to put on special, freshly laundered jumpsuits before entering. This way you couldn’t hide a rotten egg in your pocket or use the skunk spray still on your clothes.

The judge was a former perfume scientist who through a rather unfortunate lab accident had burned the inside of his nostrils and lost almost his entire sense of smell. He was not someone you could wow with just your unwashed body odor or even a couple of skunk sprays. You had to offer a combination of smells that together were more pungent and offensive than they were apart. In short with this judge you had to be a professional.

He judged the competition in rounds, eliminating contestants quickly and ruthlessly. On the strength of both his body odor and his “stinky cheese feet” plus a few well-timed exhales of his garlic breath and a terrible burp, my Dad survived to the final round.

Before they ran the final round, they took both remaining contestants (my Dad and Mike) out of their boxes to let the boxes air out and put them on equal footing before the final match.

My Dad and Mike waited around, chatted and just sat. At one point my Dad got up and walked around for a bit. Just as he heard the announcement to come back to the blocks he heard the sound of an aerosol can, felt a misty cloud touch the back of his neck, and a sweet, acidic smell filled his nose. Air freshener. He whirled around and there was Mike, but Mike looked as if he had just come up. My Dad asked him about the sabotage cloud, but Mike just smiled and claimed to know nothing about it. He’d just been looking for a skunk and hadn’t seen my Dad till he turned around. My Dad didn’t buy it, but he had no proof. He walked back to his glass box and hoped the air freshener would not live up to its odor fighting marketing. 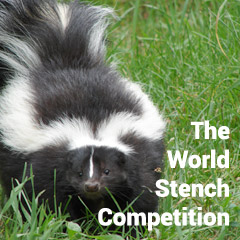