Coming off his blistering victory over the hare, the tortoise decided to set out on a world racing tour. He challenged rabbit after rabbit to a race, but somehow his triumph never repeated itself. With his racing stats in crisis he decided to challenge the slowest animal he could find.

After long consultations with his racing manager and friend, the Terrapin, he decided to challenge the Sloth. Its mammalian descent made a clear link to hares, but its lack of speed made reptilian victory a certainty. However, the Sloth had learned to hitchhike and made it to the finish line long before the Tortoise. Accusations of performance enhancing vehicles flew and a messy media circus followed. The Tortoise played the exploited victim and several news programs featured tape of his tear soaked interview.

Two days later, however, the Mouse was caught leaving thistles out for the Lion to step on and the spotlight swiveled to a new victim, leaving the Tortoise in the dark.

After another long consultation with the Terrapin, the Tortoise decided to challenge one last animal to a race. They even heralded it in the media as the Tortoise’s final race, though the Tortoise had never said that.

The Tortoise chose for his opponent a small snail who had never left his garden.

The day of the race the Terrapin painted zig zagged racing stripes on Tortoise’s shell and gave him a pair of goggles. “So the wind doesn’t tear your eyes out,” the Terrapin said.

“Good thinking,” the Tortoise replied. Having beaten the Hare, he knew he was capable of blazing speed, but not being one for practice, he had never tested the limits of his swiftness.

The Tortoise showed up early, but the Snail was nowhere in sight. The time of the race came and went without any appearance from his opponent.

They waited around all day with several heated calls between the Terrapin and the Slug (the Snail’s manager) with the Slug vehemently claiming the Snail was on his way. It grew late and dark and the Snail still didn’t show. With nothing else to do, the Tortoise plopped down and went inside his shell for some shut-eye.

Early the next morning the Terrapin knocked hard on the Tortoise’s shell. “Get up! Get up! You’re losing!”

Sure enough when the Tortoise poked his head out of his shell the Snail had almost reached the finish line. The Tortoise threw out his legs and turned on the speed or rather what passed for speed to a tortoise.

The Snail, being rather slow, had not arrived until the middle of the night. Not being one to miss an opportunity, he pushed on towards the finish line and had almost reached it by morning.

The Tortoise waddled slowly, though hurriedly, after the Snail who was inching toward the finish line.

In regular parlance this would have ended in a photo finish, as the Tortoise came even with the Snail just at the finish line. But it happened at such a speed that any observer could easily chalk the victory up to the Snail.
Despite challenges and firm requests for review and revision from the Tortoise, the ruling on the track stood and the Snail was declared the victor.

He took a victory lap, but no one stayed to see him finish it.

A few ill-tempered comments on the talk show circuit sent the Tortoise’s flailing popularity into a nose dive. Eventually the Tortoise withdrew from public life altogether, leaving the racing “to better minds and faster animals.”

The Snail, however, began a worldwide racing tour of his own. Which may have been successful if he’d been able to make it to the first venue before the end of his lifespan.

Moral: Misjudging your strengths can be the worst of your failures. 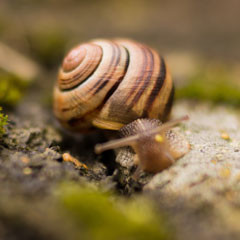