The sword and the pen had been friends for as long as they could remember. The sword would tell stories of marvelous deeds done on the field of battle or in duels and contests where valor and honor were won and lost in the blink of an eye. And the pen would enthrall his friend with tales of love and poetry so sweet it brought the sword to tears.

The sword, however, had a temper and would fly into a rage when threatened. One day his friend the pen received some accolades from their mutual employer, the Hand. Fearing he would be lessened by the pen’s success, the sword became enraged and sliced his friend in two. As the pen lay bleeding out on the table, in his own ink he wrote the name of his slayer. But the pen did not stop there. He wrote that the sword should be held faultless, for the pen loved so deeply that he forgave his friend even this.

When the Hand came to investigate the murder, he saw what the pen had written. The Hand knew that the sword, being by nature illiterate, though very sharp, could not have written the message. The sword pleaded with the Hand to tell him the words spelled out in the pen’s own ink. The Hand told the sword everything the pen had written: an essay of honesty, a poem of love, a treatise of forgiveness.

Then the Hand took the sword to his scabbard and the sword cried until he rusted. He lay there for a long time, still jealous of the pen, both his talents and his forgiveness.

One day the Hand took the sword out of the scabbard and began to draw in the sand. No longer having a pen, the Hand had filled with stories he could no longer get out, so he wrote them in the sand. Letter by letter, word by word, sentence by sentence, the Hand filled the land with stories of such beauty and elegance that the sword began to cry anew, not just because of the stories, but because he had found a place in bringing them into the world. Finally, his jealousy drifted away, and he whispered a thank you to the stars. 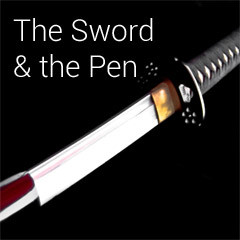