Many theories bounced around. It seemed that everyone but the scientists had their own pet theory about why it happened. Theories ranged from the impractical to the bizarre, patently false to the wildly inaccurate. Everything from gene manipulation to a chemical attack to space aliens was on the table and discussed. On talk radio surprisingly, pundits of every stripe believed it was a divine punishment for feminism, it’s just that one side thought feminism had gone too far and the other side thought it hadn’t gone far enough.

A few men also lost their voice. It was thought that this might lead to discovery of a gene or some such thing uncommon in men, but shared by all women. Most men with the condition hid it, a few even caused self-inflicted injuries in order to explain the speech deficiency. Those pitiful few who did come forward provided no conclusive results.

In the first few months there was hope that this would be temporary but as more and more baby boys were born screaming and baby girls were born with silent shrieks, the hope for it being a temporary condition faded.

In the wake of this event, sexual assaults, already disturbingly high, increased as men who saw this as divine judgment and recompense for feminist movements turned hateful speech into hateful acts. While it is unlikely that such horrors can ever be eradicated from this world, an increased police presence and hard work on a number of fronts including philanthropic provision of whistles and self-defense classes for every woman who wanted either and a renewed sense of urgency the silence brought pushed the numbers down to at least their original levels if not slightly better than in the past.

Nikki grew and flowered into womanhood silently. Her older brother was overprotective, but she took it less well than previous generations who could speak their frustration. She took to starting fistfights with him and while they both often wore bruises despite my wife’s and my efforts to stop them, this was, perhaps, the best possible solution. Nikki developed a solid right hook that warded off unwanted attention whether her brother was around or not.

Middle school and high school girls whom you’d be able to find giggling and talking loudly at every corner of the Mall’s food court sat looking at their phones and audio-texting each other. They’d send odd bodily function noises to each other’s phones to mess with their friends and demand the attention of the odd passersby. New strides in text-to-speech programs made it easier for women to type on their phone and have the phone read it out loud for them. Despite the quickness of many women’s typing this still caused a delay in conversation and many women unfortunately found their conversations with men became one-sided as men nervously or egotistically filled the silence.

Untold number of inventors, tinkerers and flim-flam men came up with gadgets and gizmos and devices that would amplify or heal or repair the vocal chords. But the condition itself was degenerative and eventually even Hannah’s harsh whisper, which I’d come to know and love, left her, and no amount of technology could stop that.

A few companies made millions taking old recordings of famous actresses and singers and creating programs that would allow a woman to type in a message and have it spoken in the actress’s voice. The processing and coding allowed someone to say words that had never been uttered by the actress or new words that had not existed in the actress’s day. Eventually they made implants that would place a speaker in the back of the throat allowing the voice to come out of the woman’s mouth, though having no control over the lips and tongue, the woman had to leave her mouth open to be heard. It was awkward, but many women found freedom in it. I would have bought one for Hannah, but she had no interest in someone speaking for her. 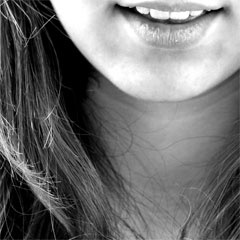