One day, while Sam was working on his homework at the kitchen table. A cow walked in the front door and went upstairs.

While Sam decided what to do about this, his teenage sister, Susan, ran out of her room. “A cow’s eating the shower curtain!” she shouted.

“The red one with the sailboats?” Sam asked.

Sam jumped up from the table and ran up to help. That was his Mom’s favorite shower curtain.

By the time Sam reached the second floor, the cow had finished with the shower curtain and started munching on the soap dish.

“What do cows eat?” Sam asked.

Susan ran downstairs and out the front door for some grass while Sam started mooing to attract the cow’s attention.

At first it seemed to have no affect so he lowered his moo and tried to think like a bull. The cow dropped the soap dish and came out of the bathroom, but before he could serenade her down the stairs she swerved into his parents room.

Sam felt like he’d been turned down for the prom.

When Sam entered his parent’s room, he found the cow rubbing her forehead on the bedstead. In her vigor to scratch her head, though, her horn caught on Sam’s parents water-bed and four or five tiny fountains sprayed at the cow. Soon the small holes tore from the pressure and expanded into one large hole. Water spewed onto the floor as if Moses had struck the rock.

The cow lapped at the stream then wandered into Susan’s room. It started munching on the clothes strewn about the room.

As Sam took in this scene he heard a loud scream. Susan had returned with two handfuls of grass. Why it took her so long to run out the front door and find grass, Sam never knew.

Susan dropped the grass and ran around her room trying to get her clothes away from the cow. She swatted the cow here and there with a sweater or a pair of jeans so that the cow would drop the t-shirt or skirt in her mouth.

Sam ran to the threshold and scooped up the grass. He tried waving it in the cow’s face, but once she’d gotten a taste for cotton and polyester the cow was not going back. Eventually Susan gave up on an old pair of jeans and a blouse that already had a hole in it. The cow too decided it was time to give up and kneeled down on the ground to chew her fabric laden cud.

Susan and Sam sat down. They laid against the bovine’s haunches and tried to come up with their next plan of attack. Then they heard the rustle of gravel and the squeal of breaks. Mom had returned.

With the additional sacrifice of an old Christmas sweater from Aunt Beulah and a pair of stained pants, Susan coaxed the cow to the top of the stairs just as Mom walked in the door.

“Susan Angela Cofax,” Mom shouted, “what in the name of calcified cow manure are you doing with Bessemer?”

Sam and Susan looked at each other. Even the cow seemed surprised by the use of her name.

“And why’d you let her go upstairs?” Mom asked.

Sam and Susan turned back to their mother.

“Farmer Johnson brought her over to eat some of our crabgrass before the county fair,” Mom said. “They say it’s supposed to make her coat shiny and her milk half fat.” She said this as if it explained everything.

“Bessemer poked a hole in your water-bed.” Sam said.

“We’ll get it fixed,” Mom said, ignoring the little rivers of her bed running down the stairs.

“The red one with the sail boats?”

“There’s only one shower curtain up stairs.”

Mom let out a whimper of despair and grabbed the banister to steady herself. “My sail boats,” she whispered.

An hour of pushing, pulling, and failure later they called the fire department. One large hole in the wall and a giant tax payer expense later, Bessemer had been hauled out of the second story and down to the crabgrass from whence she had come.

Farmer Johnson offered to pay for the damages but Mom dismissed it. “You can’t be blamed for what your cow did.” Besides she knew he couldn’t afford it anyway.

Water damage from the bed caused another large expense and insurance apparently does not cover an “act of cow.” Though somehow they covered the hole in the wall (they apparently do cover “act of fire department”).

Bessemer did surprisingly well at the fair for all the plastic and fabric in her stomach and took home third place in the state. She would have had first if she hadn’t spit out a red sailboat on the head judge’s foot.

Sam, Susan, and their Mom all learned to close the front door tightly, to stop a cow before she ever gets near the stairs, and that the Christmas sweaters from Aunt Beulah are actually good for something.

2 peer reviews of “The Cow Upstairs” 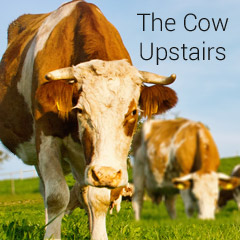