That car had come into her lane not what the police report had said, but her word didn’t sway Jimmy. And when, a few days later, little Sam didn’t wake up, she woke up the next day alone.

Things spiraled from there. Her job in the coffee shop, even with overtime couldn’t overcome the bills. The eviction notice came faster than she’d ever thought. The shame, the fear, the judgement and nary a soul to share it with. She began to believe her father was right about her.

And that’s how she found herself sitting on the side of the road, sitting on her worldly possessions holding a cardboard sign: “Please help” scrawled in a neat and flowing hand. She had held the sign, day in and day out for close to a month; long enough to know what cold really felt like, but not long enough to have forgotten warmth.

She’d been there about three hours with little to show for it but a handful of insults and an endless stream of eyes that never saw her, never noticed her, or asked how she felt.

When the man in the beat up Plymouth beckoned to her, she found herself pushed forward by hope and slowed by a cresting wave of fear. Two weeks ago a man had beckoned to her like that, then threw an entire cup of coffee at her. She’d turned away in time for the coffee to miss her face, but the scalding liquid splashed all over her shirt and pants. She shimmied out of her clothes in the middle of the intersection to keep her skin from burning. The man’s laugh, a deep, guttural laugh still played over the loudspeaker in her mind.

As she stepped within splashing distance of the old Plymouth, the man pulled out a bouquet of a dozen long stem roses. The smell, the luscious smell nearly knocked her off her feet. She reached out with both hands and accepted them into her arms like a long-lost child, like she used to take Sam into her arms. She buried her face in their petals. Buried her cares in their deep red centers and felt for just one moment, one small moment, that her father, that James, that the world, was hopelessly, shamelessly wrong. 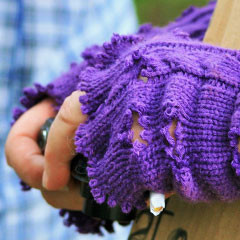 I was almost the guy in the Plymouth once, but I chickened out.