On his seventeenth birthday Edward Shepard wore a spacesuit to school. He’d built the suit from plastic tubes, cardboard, duct tape and one of his dad’s old jumpsuits. It wouldn’t meet any space agency’s regulations, but it made a striking picture as he walked to school in slow, moon-bounce steps.

When Edward arrived, James Winfield, surrounded by other soccer players, fans, and social leeches, called out to him. “Hey, Eddy. I always knew you were from another planet.”

Edward had been doing James’ math homework since the ninth grade. This year, his senior year, James didn’t have to take a math course, but he still wouldn’t miss an opportunity to remind Edward who the alpha male was.

Insulated from the harsh atmosphere around him, Edward moon stepped on by. He never acknowledged James through the gold-tinted visor. “Halloween’s next month!” James called after him. The cronies laughed and smacked him on the back. James’ eyes followed Edward’s overemphasized steps down the hall and out of sight.

Edward got a few high fives in the hall though he left most of them hanging. There were whispers in his wake. “What is he, an astronaut?” “More like a space cadet…” Safe inside the suit, he skimmed across the surface of the hallways to his locker.

Despite this notoriety, Edward made it through first period, Chemistry, with only a few odd stares and juvenile sniggers. His teacher, Mr. Norris, had a giant calendar counting down to his retirement. He took notice of little else during the classes he still taught.

Edward’s second period class, History, however, had desks that attached to the chairs. His suit would not fit. Mrs. Everheart, true to her name, smiled on him. She let him stand in the back as long as he “kept his eyes, ears, and visor open to the wonders of History!”

In third period gym, Coach Keyes was more interested in Alyssa Sheffield’s outfit than Edward’s. But Coach Keyes still made him sit on the bleachers.

Edward had prepared a speech about space walks and dexterity, but as he opened his mouth, Coach Keyes shut Edward’s visor. He pointed a sausage finger at the bleachers. Edward complied.

On his way to Astronomy he clocked two kids with his backpack and rammed a girl with his helmet. Or so Mr. Everheart claimed when he sent Edward to the principal’s office. (He lacked the compassion of both his wife and his last name).

James strolled out of Principal Hardwick’s office as Edward came to her door. James flashed his winning smile. “I didn’t realize they still had monkeys in the space program.”

Edward, visor down, maneuvered past James. He docked in the seat Principal Hardwick motioned him to. 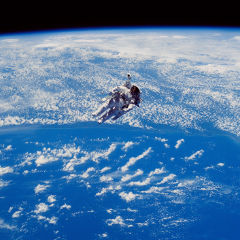 She kept her focus on the papers in front of her. “Mr. Winfield, if you’d prefer to stay out of detention I’d recommend you hold your tongue and leave.”

James scowled. He closed the office door. It thunked like an airlock.

“Mr. Shepard,” Principal Hardwick said while removing her glasses to rub her temple. “Why come to school dressed this way?”

Principal Hardwick reached over and flipped open Edward’s visor. She repeated her question.

Edward pulled a school handbook out of a pocket on his thigh. He opened it to a well-creased and red highlighted section. He showed it to Principal Hardwick.

“I didn’t ask about the dress code,” she said in a sharp verbal jab. Then she softened and smoothed out her tone. “Excuse me… I would like an answer to why you came to school dressed as an astronaut.”

“Is it Mr. Sampson’s Astronomy class?”

“Do you have a presentation?”

“Are you demonstrating some cosmological principle?”

Edward thought about that for a moment. He shrugged.

Edward took interest in a stain on the carpet.

She folded her arms and stared at him. A long, piercing stare that threatened to rip the spacesuit off his soul.

Edward played with a knob on his chest.

Edward looked at his wrist where a watch might have been. He pointed to the door and raised his eyebrows.

“All right, you may go. Be careful with that backpack. If I hear about you knocking people over again, I’ll have to confiscate it.”

Edward bowed his head forward in formal acceptance. He closed his visor and moon stepped out of the office.

“Glad to see you could join us, Major Tom,” Mr. Sampson said congenially.

Edward opened his visor. He slid into a seat next to Cranston Furbles or “Furbs” as the high school’s ruling class called him. Furbs looked at the suit and laughed just loud enough for Edward to hear. “Wow, that is quite a getup.”

Edward smiled. Edward and Furbs had shared many classes together, but had never been close.

“No,” said Furbs, “I mean it’s awful, Eddy. It doesn’t even look like a real spacesuit.”

Furbs shook his head. “You’re visor is upside down, your tape work is shoddy, and cardboard, really? You made a spacesuit out of cardboard?”

Edward pulled down his visor. He noted with horror that Furbs was right about its orientation. Furbs laughed, and it seemed to Edward that laughs and whispers rippled through the rest of the class. He should have been among his own kind, but he found himself alone on an alien world.

Edward shuffled to lunch and sat at his usual spot. His friends from Astronomy class and Furbs sat elsewhere. Only Laura Furbles, Furbs’ freshman sister, sat with him.

Edward grumbled into his bologna sandwich.

After a few moments Laura asked, “Where’d you learn to make—”

She never finished her question. A half-open carton of chocolate milk flew, hit Edward in the helmet and exploded. Edward turned in anger. Everywhere he looked he saw cackling faces and heard howling laughter. He ran from the room, his pristine suit splotched with brown. The wet cardboard sagged and ripped.

Laura, hearing the whispered gossip, followed Edward to the third-floor boy’s bathroom. She waited outside the door for a long time hoping he’d come out. Just then she heard Mrs. Snook the wire-haired librarian coming down the hall. She was giving Billy Fitz, one of Winfield’s beefy cronies, a stern lecture on “not playing hooky.” His place was in class.

Laura panicked and jumped inside the boy’s bathroom.

Once inside she heard sniffling and rustling. She followed the noise to a stall in the back.

The sniffling and rustling stopped.

“I’ve never been in the boy’s bathroom before, but I wanted to see my spaceman,” she said with a playful smile.

Edward kicked open the stall. His suit had large, brown blotches all over it. The detailed marker work on the control panels and mission patches ran and merged into ugly, puke-colored blobs. His visor had been yanked off and clumsily reattached. His eyes screamed betrayal. He pointed to the door with the ferocity of a battle cry.

When she didn’t move, he pushed past her and out into the hall. He tried to slam the bathroom door behind him, but its spring mechanism prevented him. After several more attempts he pushed it closed with a whimpering finality.

Edward wandered through the halls, avoiding both Mrs. Snook and Laura, until the end of fifth period.

In sixth period, Calculus, the milk curdled and his suit smelled. Mr. Everheart made Edward sit in the hall so he didn’t stink up the classroom. Out there he closed his visor. He tried not to notice the stares or wrinkled noses from teachers and students roaming the halls or heading to the bathroom. The reattached visor did not fit as snugly as it had before.

The seventh and final period of the day was always his least favorite: English. While Mrs. Van Pelt did not make him leave the room, she pulled out the earplugs she used during study halls and stuck them up her nose. Edward and his classmates found it difficult to analyze the words of Chaucer while their teacher pranced around with two bright orange nostrils. Most of the students sitting near Edward scooted as far away as possible. The souring milk being only the most immediate reason.

When the bell rang, Edward took his time walking to his locker and gathering his things. He walked by snickers and muffled laughs and pinched noses as students headed toward the busses or the parking lot. The suit meant to shield against gamma rays and cosmic dust—to make one giant leap for his kind—hadn’t worked. Edward grabbed his stuff and exited out a side door to avoid anyone still hanging around.

He kept his eyes on the ground in front of him. The day would be over soon.

“Spaceman!” someone shouted. Edward looked up to see a crowd blocking his path.

“You looked like a loser this morning, Eddy,” said James, “but you had to go and smell like one too.”

Edward’s shoulders sagged. He’d had enough of these kinds of meetings to be resigned to their outcomes. He turned around hoping to reach the safety of the school building.

“Why, Eddy Boy,” said James in mock pain. He put his arm around Edward’s shoulders and turned him back toward the crowd. “It seems like you don’t want our excellent advice.”

“You’re gonna take it anyway,” Furbs said, vying for second-in-command of the mob.

James continued his own line of reasoning without acknowledging his counterpart. “Well, spaceman, you know what? I just want to help you.”

“Yeah. I want to see you fly higher than anyone has before.”

Edward shook his head and waved his hands in protest.

Billy Fitz and another of James’ goons took places to the side and behind Edward.

Edward smiled nervously. He let James lead him around the corner. The crowd followed.

“You’re gonna be famous, Eddy Boy.” James spread his hands as the flagpole came in sight. “We’re gonna send you to the stars on a rocket ship.”

Edward tried to fight, to struggle, to get away, but the suit was bulky and awkward and the goons were strong, so much stronger than him.

In his struggle his suit’s backpack tore off. His helmet fell to the ground; its visor cracked under the feet of the mob.

They brought Edward to the flagpole and hooked him onto the flag rope. With all saluting, James counted down from T-minus 10. At “liftoff” the goons hoisted Edward into the air. A few audible rips happened during the trip heavenward, but the suit held firm. The sky went dark as storm clouds rolled in.

“Come on, spaceman! Can’t you fly down from there?” Someone called out.

“Did you get stuck in the troposphere?” Furbs shouted. No one laughed.

Edward didn’t say a word. He looked at the crowd of classmates and former friends and people he’d never seen before. He felt sorry for them. Up here their words mixed into white noise. He had the perfect view. All the pain and frustration and awkwardness that put him in that suit melted away. He felt like a helium balloon reaching for the sky.

His eyes fell upon Laura. She stood stock still in the middle of the rowdy mob wearing his trampled helmet. Half of the visor still clung to the helmet. The other half was gone. Even at that distance he could tell she’d been crying.

He smiled at her. His body tugged at the rope, longing to be free, yearning for the sky. Then he unhooked himself from the flagpole. With one last breath, he pushed off and floated toward the stars.