Once upon a time there was a man with a robotic arm. He lived with a robotic monkey in a small house on the side of a remote mountain that overlooked the great sea. They made a living by crushing nuts, breaking rocks, and lifting things for the people of the local village. If anyone in the village had a heavy object to move or a jar they couldn’t open, they knew who to call.

One summer a monster came down from the north and periodically terrorized the villagers. The monster sat on houses or picked them up and ate them just to watch the people run. For extra fun he’d pick up a chicken coup and toss it down the center of the street like a bowling ball, watching the people scatter like pins.

One day the man and his robot monkey decided to eat their dinner outside and watch the sun drop into the sea. As they walked out of the house with their sandwiches (they loved sandwiches) they saw the monster sitting on one house and eating another. (He’d gotten tired of chicken coup bowling by this point and felt “rather peckish,” but had not yet learned the wonder of sandwiches)

“Hogarth’s back,” the man said.

“Didn’t we drive him away last week?” the robot monkey asked.

They each grabbed a quick bite of their sandwiches (they really loved sandwiches) and headed down to the village.

“Hogarth,” the man called, “time to leave.” His voice had the boom of command and the edge of disapproval.

Hogarth turned and lunged at the man with open jaws. If the man had not grabbed a beam from one of the broken houses and thrust it in between the angry teeth he might have needed more than an arm replaced.

Hogarth shook his open mouth, but the beam held firm. He could not snap the beam with his jaw and his arms were too short to dislodge it.

Most days this would have sent Hogarth back to his mother in tears, but today he decided he wasn’t going to let a bully get the best of him again. Hogarth smashed his face into a nearby house and dislodged the beam along with three of his teeth.

“You’re interrupting my dinner,” Hogarth said. The pain of losing the teeth dulled his reason and his timing. He lunged for the man and his monkey again, but both jumped away before his jaws could clap shut.

The man pulled up a tree by the roots and began parrying and thrusting like a fencer.

Hogarth picked up a large rock and threw it down on the man’s makeshift sword, snapping the wooden sword in half. The man tossed the stump at Hogarth and ran for it. The robot monkey followed hot on his heels. The stump caught Hogarth on the right cheek and left a deep gash in its wake. Rage boiled in his belly and a fierceness he had rarely felt sent him tearing after the man and his monkey.

The man and his monkey ran for a long ways twisting and turning around the perilous curves of the mountain, but somewhere on the winding paths of the mountain they took a wrong turn and found themselves at a dead-end. When the man and the monkey turned around, Hogarth had already started down their path. The walls were so smooth that even the robot monkey couldn’t find hand holds for climbing out. They had nowhere to go. 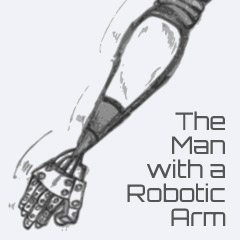 Hogarth stomped into view. He laughed when he saw them. “You guys think you’re so strong,” he said. He licked his lips and rubbed his hands together. “I’m going to enjoy dinner tonight. All those houses give me indigestion.”

The man and the monkey both picked up stones and slung them at Hogarth trying to stop his advance, but the rocks were too small, like dust particles slung at a human. Even the combined strength of the man and his monkey could not get them out of this mess.

Hogarth towered above them and licked his lips once more. He opened his mouth, and leaned forward.

“Why?” The robot monkey shouted suddenly. The shout startled Hogarth (and the man). Hogarth pulled back and looked quizzically at the robot monkey.

He hadn’t thought about why. He was well aware that he was not an exceptionally smart monster. He always wanted to think about things before he committed to them. So he sat down to think about why the houses gave him indigestion.

After a long, tense moment he said, “I think it’s the plumbing. Too much water and… other stuff… Ruins my constitution.”

“Why,” the robot monkey said again, stalling for a plan, “do you eat houses if the plumbing… and such… upsets your tummy?”

Hogarth shook his head and looked off into the distance. “Everyone runs away when I come to the village,” he said. A single tear traveled out of his eye and down his snout. It perched at the end of his nose for a minute before being joined by another finally falling to the ground.

“Probably because you eat their houses,” the man said, “and throw chicken coups at them.”

“That could be…” Hogarth said noncommittally. He wanted to think about that before he agreed. “I think they’d find me to be a rather nice monster, if they didn’t just run away.”

“How about you promise not to eat us,” the man said. “Then we can tell everybody how nice you are, that you won’t eat anymore houses, or throw any more chicken coups and then they won’t run away.”

“We can’t do much for you from inside your tummy,” the robot monkey pointed out. “Our nutritional value is questionable.”

Hogarth thought this over. His stomach rumbled and he burped out a cloud of gas. “Ugh,” he said, pounding his chest. “That tasted just as bad going down…” He looked down at them. “You’ve got a deal,” he said.

The man, the robot monkey and Hogarth all went back to the village and no one was eaten or disparaged the whole way home. Everyone kept their end of the bargain. The man and the robot monkey said very nice things about Hogarth and even gave him excellent references when he went looking for work. After a short time he started his own business, Hogarth Wrecking & Construction Inc. The man and his robotic monkey also taught Hogarth the delicious benefits of sandwiches and Hogarth now eats two-hundred thirty-seven sandwiches per day.

The man and his robotic monkey, could no longer find work lifting, crushing, and opening things. From that day on they could only find work solving problems and using their minds to stop recurring issues. And they were paid handsomely for it.

Without Hogarth destroying infrastructure every week or so and Hogarth’s construction business, the village grew into a city and prospered right along with Hogarth, the man, and his robotic monkey.