There once was a fairy named Shrinkle-Dinkle. He lived at the end of a long, forest lane with his cousins Whoops and Oops. Shrinkle-Dinkle earned a living for the three selling potions and spells, particularly of the size manipulation variety (shrinking, growing, and right-sizing).

Oops and Whoops had a mischievous streak and liked to play practical jokes on Shrinkle-Dinkle. One time they laced his breakfast with dragon peppers. Besides the massive heart burn, he belched fire for three weeks.

Another time they used his very own Gro-Po™ on him. They balanced a bucket of it over the outside door. As Shrinkle-Dinkle walked out the bucket dumped on him. He grew to the size of a human and had to sleep in the forest for three days, dodging foragers from the nearby human village, until he could finish a right-sizing potion and fit inside the house again.

These pranks usually made Shrinkle-Dinkle very, very angry. He’d be so angry he would try to get back at Oops and Whoops shrinking their heads with his wand or making their feet extra-large with some spare Gro-Po™. But when Oops saw Whoops and Whoops saw Oops they would think the other one looked so funny that they’d just start laughing and they’d laugh so hard they fell to the ground. And when someone laughs like that and looks as silly as Oops and Whoops did with shrunken heads or giant feet, it’s hard not to laugh along.

Inevitably, Shrinkle-Dinkle would start with a smile. Then the smile would turn into a giggle, and the giggle into a chortle, and the chortle into a full-blown laugh. Soon he’d be rolling on the ground laughing with them. By the time they finished laughing they’d all be friends again and Shrinkle-Dinkle would use his wand or a potion to return their heads or feet to normal size.

One day Oops and Whoops decided to play another trick on Shrinkle-Dinkle. They went into his potion supplies and replaced his Shrinkum Root with Stinkum Root. In most potions this simply would have made the person who took the potion smell bad instead of get smaller, but Shrinkle-Dinkle planned to make Gro-Po™ that day. That recipe called for stirring the Stinkum Root in with Dragon Breath and Flint-Spark, making a rather volatile combination. In short, the latest batch of Gro-Po™ exploded in Shrinkle-Dinkle’s face with one of the foulest odors he’d ever smelled.

After his eyes got over the flash and his nose got over the smell, Shrinkle-Dinkle heard Oops and Whoops laughing from the other room. His blood began to boil. Not only had they embarrassed him, but they’d wasted a lot of expensive ingredients and damaged his cauldron. He decided to teach Oops and Whoops a lesson. So he burst into the other room and shot a spell from his wand at each of them, but whether it was the speed at which he moved or the anger that fueled his rage or just poor aim, he missed their brains and shrunk their hearts two sizes instead. 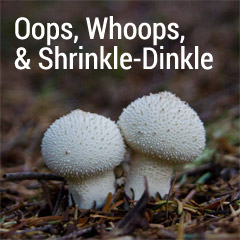 At first little seemed to change, except that no-one laughed after this spell. Oops and Whoops looked at each other. Oops sniffed the air and made a face. Whoops did so too. Then they looked over at their cousin. Stinky soot covered his face and chest and the explosion had grizzled his beard and hair. That’s when they started laughing, and not the good-natured laugh they had always had, no, this laugh had an edge to it, a meanness Shrinkle-Dinkle had never heard from his cousins before. It made Shrinkle-Dinkle’s heart hurt. They were laughing at him.

“Stop it,” he said, but that only made them laugh harder. Finally, after a long time, Oops and Whoops walked off without an apology or any attempt to make Shrinkle-Dinkle feel better. Shrinkle-Dinkle went straight to bed though it wasn’t even dark out yet.

The next morning things got worse. Oops and Whoops ate every last bit of the Brownie Bread, even though there had been plenty for all three and they did not refill the water jug when they drank the last drop. Plus they left the kitchen and breakfast table a mess. They had never helped Shrinkle-Dinkle with his work or done many chores, but they’d at least leave him some Brownie Bread, since they knew it was his favorite.

When Shrinkle-Dinkle came downstairs, he had to clean up and eat the little bit of Troll’s Stew from last Thursday because that’s all that was left in the house.

After he’d cleaned up the house he went off into the forest to replenish his stock of potion ingredients. Before he got far, though, he found odd things: here or there he’d find a mushroom three times its normal size or a full-grown tree that didn’t reach above his ears.

Suddenly he had a terrible thought. He ran back to the house and into his potions room. The shelves along the walls were empty. He ran to the store-room and threw wide the door. Every last shrinking, growing, and right-sizing potion he had saved and prepared for sale, their livelihood and their future, was gone.

He ran out of the house and followed the trail of odd-sized objects. Soon he realized the direction the trail led: the human village. Shrinkle-Dinkle quickened his pace; things were only going to get worse.

As Shrinkle-Dinkle got closer to the village he started hearing screams, then a few tiny humans nearly knocked him over as they ran past.

In a few paces Shrinkle-Dinkle reached the hill overlooking the human village. He did not like the sight that greeted him: Houses of every size and shape, shrunk and grown, giant goats eating the thatch roofs and chimneys off the regular-sized houses, tiny men trying to fight out of control hearth fires in giant houses, dogs running and barking and trying to herd giant sheep, cattle stepping on shrunken houses, humans running and screaming to get away however they could.

There in the midst of it all were two larger than life fairies, indiscriminately raining size manipulation potions on anyone or anything that crossed their path.

Shrinkle-Dinkle pulled out his wand and right-sized everything within range as fast as he could mumble the spell and point his wand. As the pandemonium began to die down Oops and Whoops turned toward Shrinkle-Dinkle. The hearts filled with love that had tempered their mischievous side were now too small to overwhelm it. To make matters worse with each terrible, selfish act they had shrunk their own hearts even more. They cared only for their own amusement. All love for their cousin had been squeezed out.

They threw potion after potion at him. Shrinkle-Dinkle dodged and swerved, zagged and zigged, nearly missing every potion they threw at him until a bottle of Gro-Po™ shattered on the ground in front of him and splashed his feet. His feet suddenly swelled to ten times their original size and his legs could no longer move them. As he raised his wand to right-size his feet, Oops threw a shrinking potion, the last of the potions they stole, at Shrinkle-Dinkle.

Oops and Whoops closed in, smiling at how they’d trapped their prey. “What should we do to him first?” Oops asked.

“Let’s shrink his teeth one by painful one,” Whoops said.

“Or we could giant size each of his organs individually.”

“Or,” Whoops said, raising his own wand, “We could do both at the same time.”

Oops and Whoops both laughed. All sense of remorse, pity, and empathy had been pushed out when their hearts shrank.

“We were just having fun,” Oops said. “We thought you liked it too,” Whoops said. They looked into his eyes and both of them finally understood the burden Shrinkle-Dinkle carried of providing for them while they played and exploded his potions and made messes for him. A tear rolled down each of their faces. “I’m sorry,” they said almost together. And right there, each of their hearts swelled to twice their original size.

Shrinkle-Dinkle looked from his cousins to the mayhem around them. “Let’s fix this,” he said.

For the first time Oops and Whoops looked beyond themselves and their cousin to the catastrophe they had brought on the human village.

“Let’s fix this,” Shrinkle-Dinkle said again, but this time he added, “together.”

Once they finished setting the village aright and making what peace they could with the humans, Shrinkle-Dinkle taught his cousins about the herbs and leaves and roots that the forest held and how to gather the ingredients for his potions.

Together, they worked to rebuild the stock of potions and with Oops and Whoops help, fairies from far and wide learned of Gro-Po™ and Shrinky-Dinky™ and all three of them prospered.

Now Oops and Whoops are still known to play practical jokes quite often, but only ones that make Shrinkle-Dinkle laugh too. And Shrinkle-Dinkle never shrunk his cousins (or any part of them) again.