Sarah Wright allowed her meeting to go over its scheduled time by seventeen minutes and thirty-seven seconds.

Clarence Phelps ate the last donut in the kitchen AND left the box on the counter.

Samuel Gilchrist leaves his lunch in the group fridge until it smells.

Jennifer Johnson does not provide IT support, despite it being directly spelled out in her job description.

Christina Sellers does not pick up her print jobs from the printer.

George Smith takes food from the fridge that does not belong to him.

Jeffrey Clemons guffaws regularly, leading to the distraction of other workers. It is not yet known what he is laughing at, but cat pictures and social media are suspected.

Freida Newsome spends half her day on Facebook and the other half on Twitter with Pinterest in between. Her job description does NOT include social media nor can it be derived from the less specific portions of that description.

Carry Hammons will discuss no other topic than her twelve cats.

This notice has been published to shame the guilty, and show them how sad and petty their lives are. 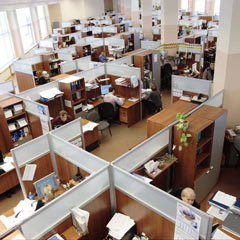 This is a direct sequel to The Office Book of Shame. They are best when read sequentially.

Clarence Phelps made coffee when it wasn’t his turn.

Leonard Hopkins refilled the water cooler WITHOUT being asked.

Samuel Gilchrist once opened a door for me while I was carrying something.

George Smith… has a dog that jumps really high.

Jennifer Johnson once fixed a virus issue, or at least I heard she did, and that person, let me tell you, he was grateful.

Christina Sellers selects the best pictures of cats to print that I’ve ever seen. I’ll come to the print tray and be wowed by that cat picture, and I’ll know they’re hers because no one else prints out such good cat photos.

Jeffrey Clemons often uses a breath mint after eating garlic. He keeps that breath nice and fresh, he does.

Freida Newsome has lots of friends, and not just on social networks, she’s a regular party animal. I mean that in every sense of the word that is wholesome and something to be sought after, and not the other way…

Carry Hammons likes cats. That’s a good thing right? Somebody’s got to love them, and boy does she love the Schmoopsy poo out of them. Put her together with Christina and you’ve got one unstoppable feline-loving pair super team.

James Pearson is a wonderful specimen of humanity. He’s honest, hard-working, highly attractive and totally forgiving. He even gives people back their jobs even though they don’t deserve them back, right?

This notice has been published to give public fame to the totally innocent, and show them how awesome and respectable their lives are.

Laura Smith’s picture of her mom

Larry Jackson’s jokes, particularly at the water cooler or when trying to impress Connie from accounting.

Our clients’ excuses for why they haven’t paid us yet.

The two-legged dog Bob Wheeler took in after he hit it with a car.

The excuses Connie from accounting has every time I ask her out.