He stood in a dim, underground chamber with hand-smoothed walls. An intricate carving lay ten meters ahead of him. Thin and ghostly, in the twilight beyond his lantern’s reach, he focused hard on making out the bits and bobs of the language he had studied half his life.

He was an independent thinker; one the University couldn’t stop from completing this “fool’s errand.” If he was wrong they’d cut ties. If he was right they’d take the credit.

“No monsters?” called a nervous voice from above.

“Haven’t eaten me yet,” he called back, stepping toward the carving.

The nervous voice, Dr. Thaddeus B. Fullerton, dropped into the room and landed on his feet. He smiled and, proud of himself, strutted toward Samuel. Tripping over his own feet, he fell unceremoniously to the ground. He somehow came to rest with his backpack under him, his pelvis in the air, and the top of his head resting on the cold, stone floor.

“Curious that they would write an inscription upside down,” Thaddeus said.

“What?” Samuel asked. “You’re reading it upside down?”

“Yes,” Thaddeus said squinting at the engraving ahead of him. “It’s lucky I fell! Here we go ‘When two again are one, and all the worlds are done, we’ll meet against the stars, and learn the hardy hars…’ Well that’s rather odd.”

“It rhymed in English?” Samuel asked. “It’s an ancient language.”

“And it used an English colloquialism?”

“And it was meaningless, obtuse, and applicable in thousands of unforeseen circumstances?”

“Where’d the British accent come from?” 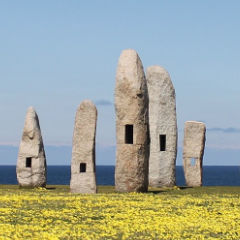 “One time the Mounties were playing hockey and one broke a bone and we were like, ‘Glad you’re not American, eh?’”

“And a rather terrible stereotype…” Samuel’s mind raced. He’d known Thaddeus for years. “a useless anecdote… Several accents in the space of a few lines. Oh, no… he’s—the author—he’s a hack—and he’s editing…”

Samuel felt the tomb falling down around him. The ancient stone and inscription melted into an alien planet with bright purple walls and a set of shimmering characters projected in a beam of light. Samuel’s lungs burned, and he struggled for breath until his archeology clothes turned into a spacesuit. Samuel knew Thaddeus or rather “Thad” had tripped as before but this time over the alien device that the beam of light now emanated from.

Years of ancient languages and archeological study blinked out of Sam’s mind, replaced by Star Academy and cadet pranks. “He’s editing my backstory,” Sam thought. The image of his lawyer wife, Denise, and their two adopted chidlren melted into a young, blonde woman, Becky, whom he’d just met but fallen madly in love with. She was beautiful, coquettish, and well endowed. That was the extent of ‘Becky,’ a cardboard cutout of a real woman.

Sam looked over at Thad. His glasses and bookish looks had been consumed by rippling muscles and a chiseled jaw. The academic intelligence in his eyes dulled to a fool’s sheen.

“This author sucks,” Sam said, “What a sellout!”

And then Sam disappeared.

Captain Thad Righteous, Commander of the Intergalactic Star Brigade stood triumphantly in front of a pile of sparkling jewels. Becky swooned at his side.

“Oh, Thad!” she gushed. “I can’t believe you’ve beaten all of your foes and found the lost treasure of Arbenshoobenstuben! You’re my hero!”

“All in a day’s work for Captain,” he paused for dramatic effect, “Thad Righteous!”