One more good kick and the hole was large enough for Ox to get his hands in and pry it open. Guards entered, drawn by the alarm.

As Ox and Fishmonger advanced on the guards, Gerard pulled a small metal box from the safe. She opened the lid and pulled out a handful of ID cards; she slipped those in her pocket, then pulled out two rings and slipped one on the ring finger of each hand. “Now those are back where they belong.” She dropped the box, pulled out her plasma pistol, and shot each of the guards Ox and Fishmonger were battling.

She handed ID cards to Ox and Fishmonger as they stole through the halls. Most of the guards were trying to contain Cy; only a few had peeled off to look into the alarm in the living quarters, and they were easily dealt with.

Gerard, Ox, and Fishmonger came to a nondescript door with a card swipe. She slid a card through the reader. The light blinked green and the door unlocked.

“You sure this is right?” Ox asked.

“Yes,” Gerard said as she walked through the door and beckoned them to follow.

Next they came to a security door, with a thumb reader and more. She pulled the scanner from her pack and printed out a thumbprint, then put it on and touched the thumb pad. The door opened.

The room inside held floor-to-ceiling stacks of high-tech equipment. Some was used for storage, some for encryption, some for communication, and some for things Gerard couldn’t even guess.

“Ox, start over there the crypto-keys,” Gerard said, pointing toward a bank of equipment to her right. “Fishmonger, watch our backs.”

Gerard stepped through rows of equipment to a workstation where a young tech sat watching the screens. He turned at her approach. “Sam?” he said before she punched him.

He held his nose as blood began to flow. “Owww! Why would you—” Her second blow landed on his temple and he blacked out before he hit the floor.

“You know him?” Fishmonger asked.

“I should be the one to do this,” Fishmonger said. “Why was I even recruited if you handle all the tech?”

“Because you can be trusted.” She switched off comms. “And they can rewrite your cybernetic software whenever they want.”

He sniffed derisively. “They only think they can.”

Gerard plugged a data disk into the computer and typed furiously. “You’d still have your leg, if they hadn’t. And Masq wouldn’t look at you with fear and hatred.”

“Ready,” Ox called from the other side of the room.

Gerard switched her comms back on. “Almost there.”

“Almost where?” Toliver asked through the comm. “You’re supposed to be destroying that room once you upload the virus.”

“Yes, we should be destroying the room, but this class of data disks makes recovery very easy unless you wipe the data first. Do you want these files gone, or Clawf to simply be inconvenienced?” 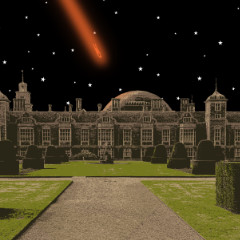