“Carl Fitzworth, you are under arrest for kidnapping, child endangerment, and allowing the child to leave the state.”

“Even if you had enough evidence to bust me you won’t,” Carl said. “For the next four days, I’m staying put. I’m ground control for this moon visit and no one knows these systems or the modifications we’ve made like I do. In short, I’m the best way to get him home safe.”

“He wanted to go. He chose to go. He came to me. Last Sunday after you went to work he ran away to Larry’s house. Pleaded with us to send him. He couldn’t wait to go, wanted to go that night. I told him to go back home, but he insisted we try. He insisted we go through with it.”

“How can you…” She faltered and her voice grew quiet. “Don’t blame Jad for this. You put the idea there. You wouldn’t take no for an answer. Whatever happens is on your head.”

“Ummm…” Larry’s voice came through the speakers. “Carl, you there? We’ve got nothing but silence, if you’re on mute we need ya. Jad’s going to need some help on an orbit vector.

“Jad, you ready for a slingshot?”

Carl waved off Lisa and the police officer and turned back to his monitors.

“Alright, Jad, I’m back. Give me a second for the calculations.” He stopped speaking while he scribbled on a piece of paper in front of him.

“Sir,” the police officer said. “Instruct the boy to return to Earth.”

Carl hit mute on the mic and said, “You have no jurisdiction.”

“Nonetheless, instruct him to return, before I haul you off for child endangerment,” the police officer said.

“Go ahead and try,” Carl said. He unmuted the mic and handed the headset to the officer.

“Jad, can you hear me?” the police officer asked.

“Son, this is Officer Mike Richards of the Mountain View Police Department. I’d like you to bring your…rocket back to Earth.”

Carl had prepared Jad for this possibility. “With all due respect, Officer Richards,” Jad said, “I am no longer within your jurisdiction and so I need not comply.”

“Son, your mother is here and would like you to return,” Officer Richards said. “She says she loves you. Would you like to speak with her?”

But Jad interrupted. “No, Sir, you listen. I’m going to the moon and that’s final. Nothing you can say will change that. While we’re talking I’m burning fuel and decreasing the chances I have of making it home safely. I’m out of your jurisdiction so it’s no longer your problem. Now please put my Dad back on. I’ve got a mission to complete.”

Officer Richards held his composure. He’d been bested by a thirteen-year-old. Although it hobbled his pride, he was man enough to know when he was beaten. He handed the headset back to Carl.

“Ok, dial the Pendleton up to fourteen,” Carl said. “…then I need a burn for a full minute while we swing around the Earth. As the moon rises you’ll need to pull off toward it, OK?”

“Shouldn’t we start at-” Larry began.

“Larry, follow him around then set up a lunar synchronous orbit,” Carl said.

“OK,” Larry said, deciding not to push the issue.

Jad hit the ignition and The Sun Skimmer shot forward. Larry followed suit in The Amalgam.

Jad turned and using both his eyes and his instruments, set a course for the moon.

Carl gave out a whoop. A chill swept through his body and he felt once more like the young fighter pilot flying jets in the third Iraq war. Victory was assured. Triumph was in reach. He would prevail. 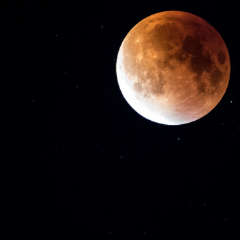