A man, Bernie, hurriedly crosses the street and looks from a piece of paper in his hand to the numbers on the buildings above him.

Consumed in his hurried search for the right building, his eyes miss the crack in the sidewalk, but his feet don’t.

He picks himself up and picks up his briefcase. He continues the search, but more slowly.

M-m-my sister told me to be there by six, but the train was late and I’ve never been too great with directions… I hate being late.

Bernie matches the address on the building in front of him to the paper in his hand.  He opens the door and walks up the steps.

I finally found the place at about 6:15, but it didn’t matter, she wasn’t home yet.  I was already kind of annoyed at myself for bein’ late, and missin’ the season première of Galactic Space Wars made it all the worse.  Yeah… I taped it, but it’s so much better live.

Bernie knocks and waits.  He knocks a couple more times but without receiving an answer.  He looks in nervous frustration down at his paper again and checks the number.

Bernie leans out the door and looks up at the number on the building.  A woman in a hurry walks up to the door while Bernie is blocking it.  He realizes after a moment that he’s blocking the entire door and moves out-of-the-way for her with a smile and a chivalrous hand
gesture.  She smiles courteously and hurries up the stairs.  Bernie takes another look at the building then heads up the stairs.

Bernie approaches the door of the apartment again to find the woman who passed him at the stairs fumbling with her key in the lock.

Well, now that introductions are over with…

Her name was… well, is Allyson. And, for a moment, I forgot my annoyance.

She finally unlocks the door and with the same chivalrous hand gesture, ushers him into the apartment.

Allyson drops her keys to the left of the door and motions towards the table.

You can get set up right here.  I’m sorry I was late, I had trouble on the train.

She walks into the bedroom.  Bernie puts his briefcase down on the table, opens it and begins to remove papers and a tape fed calculator.

Told me you go by Bernie.

Yeah, well… I actually prefer Bernard, but my mom was the only one who’d ever call me that.

I’ll just be a moment.

Take your time, I’m just about set up.

He waits for a long moment, pen in hand.  Staring across the table towards the bedroom.

A toilet flushes and Allyson reenters.

Bernie moves some papers over to her side, hands her the pen and starts pointing at different parts of the paper as the sound fades out.

It was the most fun I’ve ever had doing taxes.  I felt comfortable with her… like I could be myself… heh, I even told a few jokes.

(solemn then smiling from ear to ear) 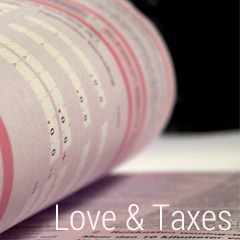 This is a script I wrote back in grad school. I hope you enjoy!