Invincibility and invisibility are not the same thing.

Heroes aren’t perfect even if their teeth are.

Villains have feelings too. Albeit sociopathic ones.

If you smash their house fighting a super villain, people probably won’t throw you a party, particularly if your hero calls them a bunch of whiners and fake sobs at their town hall meeting.

Tights are well named, and have a propensity for bunching in all the wrong places.

Capes look awesome. Not so functional.

Always put away your gear and your hero’s gear. That way you won’t get blamed for running an inordinately expensive crime fighting gadget through the wash because you foolishly thought your hero knew better than to carelessly leave said equipment in his pants pocket.

Secret identities, including your sidekick’s, can only stay that way if no one blabs about his public persona to every girl he’s trying to date.

Check with the damsel before you assume. They often know good lawyers and are far more likely to use them when a hero uses a cheesy pickup line afterward.

Sometimes there’s not all that much behind the mask.

When your hero hires an opposite gender sidekick without consulting you or even considering how you might feel and then gives her a name more closely aligned with his own than the random name he gave you off the side of a pizza box, try not to take it personally. Just ride out the marketing ploy.

Headshots mean something very different in PR and publicity contexts. Make sure your hero knows the difference before meeting the firm you’ve hired to enhance his image.

No one cares about _your_ nemesis.

Ladies aren’t so fond of being stood up for the sake of nameless humanity. Or your hero’s coffee run, for that matter.

Sometimes megalomaniacs lack confidence, even the heroic ones.

Heroes can turn evil if you mess up their latte.

Autographs don’t write themselves (nor do the heroes).

If everyone calls your hero Pompous Man, Captain Ego, or the Giant Head That Ate Everyone’s Feelings, he may not be considerate of your emotional health.

Witty repartee is only in the movies (and your hero’s day dreams/memories of events).

You can change your name, take down villains your hero never dreamed of fighting, and have a long, successful solo career, but no one will remember you as anything but Stupid Sidekick Name Your Hero Literally Chose Off the Side of a Pizza Box and You Accepted Because You Were Twelve And Didn’t Know Any Better.

You didn’t get into this for the glory. 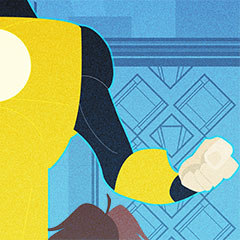