Jeff tried to roll down the window of the unrestored 1984 Toyota Cressida. He searched for the automatic switch, but they built this car before any of those fancy options were commonplace. He found a handle that looked promising. After two cranks the handle came off in his hand, and try as he might, he could not get it back on. He took a deep breath and turned his attention through the window crack to the man in the uniform outside.

“You have a tail light out,” the officer said.

“Could you turn the car off, please?”

“Sir, it might not start again if I shut it off.” George had given him strict instructions that the spark plugs were misfiring and, “Beulah mightn’t start again fer eight, nine hours.”

At least that’s what he thought George had said. The thunking of the engine and the way George slurred his words together–like two colors of paint poured in the same pan–made him difficult to understand.

“Very well,” the officer said. He had already tired of Jeff’s face. “License and registration.”

Jeff breathed through his teeth and cursed George. He pulled his license out of his wallet and pushed it through the sliver of open window.

“I like your ‘I shot the sherif,’ bumper sticker,” the officer said without smiling. “It’s almost as good as your license plate ‘PGPTRL’.”

“I’m sorry,” Jeff said. “This is my friend’s car.” Words seemed like a good way to hide. “I don’t know him that well.” Jeff laughed though it wasn’t funny. “Just met him at a friend’s poker game a few months ago. He needed a ride to the airport… I needed a car while mine’s in the shop… seemed like a good fit.” Jeff laughed again. He touched the door and looked up at the officer. “He calls it Beulah…”

The officer leaned toward the window to cut the glare. This was turning into more than a routine traffic stop.

Jeff lunged for the glove compartment one last time. His legs kicked out automatically for balance.

The officer shouted with pain and stepped back. Jeff turned toward the cry as an officer-sized face print remained on the window.

As the red-faced police officer came back into view, Jeff’s fumbling fingers opened the glove compartment. Out fell two dog food cans, a tiny hula skirt, a glass and metal object Jeff couldn’t identify (but the officer could have if he weren’t rubbing his nose) and a half-frozen package of bratwurst.

Jeff smiled nervously and reached inside the glove compartment. He rifled through an ample supply of brochures taken from small towns in far off states. Yet still he found no registration.

Jeff turned back to the officer. “Umm… I’m sorry… about your face… and ummm… like I said… it’s my friend’s car… I can’t seem to find the registration.”

Jeff laughed again. He mimicked driving a race car through sharp turns. “That seem’s to be the top speed on this chicken crate…” Jeff said.

The officer looked up but his expression didn’t change.

“The uhhh… the ramp that I… that I used,” Jeff continued in a low tone, “put me in the left lane and it didn’t feel safe to swi-”

“Speaking of chicken crates,” the officer said. He pulled down his sunglasses to see more clearly. “Do you have a license for transporting poultry?”

Jeff looked behind him. Where the backseat should have been there stood four crates of live chickens and an ornate bird-cage holding a parrot. Their clucks, clicks, and warbles had been so muffled by the rattling and thunking engine that Jeff had almost forgotten about them. “Do I need a license?” he asked.

George had just shrugged when Jeff asked about the backseat fowl. “Just some birds,” he had said. “I threw some feed back there. They’ll be fine.” Jeff knew nothing of the care and feeding of chickens and parrots, but that seemed insufficient as a feeding rubric for a week. When Jeff pushed further, though, George just said, “They’ll be fine. Don’t worry about it.”

“Your friend’s?” the officer asked.

The officer looked at Jeff. “You ever smoke anything more than cigarettes?” he asked.

“I don’t know how that bird knows my name, Sir. My friend, George, picked me up from my house, we drove to the airport, then he flew away and I’m driving home. That’s all I know.

“I’m telling you,” Jeff said, his voice rising an octave “none of this is mine. It’s all my frien-”

“What’s that?” The officer asked.

“My friend said the engine does that sometimes.”

Three long thunks followed and then three shorter ones.

The officer was not requesting.

Jeff turned the key and the engine spluttered to a halt.

The thunks continued in a pattern: three long thunks, followed by three short, then three long ones again.

The car was too old for a trunk release so at the officer’s behest, Jeff got out and opened the trunk with the key.

As the trunk opened a mime jumped out. He hugged the officer. He pointed at Jeff and mimed crying, then he imitated a compass and pulled himself along a rope until the officer finally pointed up the road and said, “That’s North.” The mime hugged him silently again and ran up the road and out of sight.

Just then over the officers dashboard radio came, “All units, be on the lookout for a silver, 1984 Toyota Cressida with license plate P-G-P-T-R-L it’s wanted in connection with a mini-gulf incident. Over.”

The officer looked down at the golf clubs and hippopotamus head in the trunk. He turned toward Jeff. 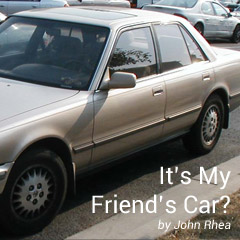 This is my first attempt at a farce. I hope you enjoy it.