They drove to a run down Italian restaurant on the outskirts of the city. They walked in and took a table in the far back. Dr. Smite positioned himself to watch the door, while Wilbur slid into the seat across from him.

“What are we doing here?” Wilbur asked.

“The pancakes are delicious here,” Dr. Smite said. He studied his menu.

“This is an Italian restaurant.”

“Their nationality has no impact on the quality of their food.”

Dr. Smite put down his menu and looked over folded hands at Wilbur. “Do you know how you survived?”

Before Wilbur could answer a waitress walked up. Without shifting his piercing gaze from Wilbur, Dr. Smite said, “Two orders of pancakes, Myra.

“You had stage four pancreatic cancer,” Dr. Smite said to Wilbur once Myra had left. “What saved you?”

“Sometimes I wonder if I have been saved.”

Dr. Smite smiled. “Then I think you’re ready to know.”

Myra returned with two heaping plates of pancakes and a bottle of syrup. She set the plates in front of them.

When she left Dr. Smite continued. “Have you ever heard of Unus Equus?”

“They were long believed to be a myth, but technological advances allowed us to capture the first images of them about a decade ago.” He poured syrup over his pancakes. “And about six years ago we captured the first one. We don’t know all the ins and outs of how it works yet, but-”

“Why are you telling me this?”

“Mr. Dibbs, if you will allow me to get through a sentence, I will gladly clear up all the details.”

“Now as I was saying six weeks ago we captured the formerly mythical creature known as a unicorn. Somehow this animal puts itself out of phase with the rest of reality. It’s like light just passes through them or to be more accurate they reflect it back in a way that cancels out the reflection, making them invisible to the naked eye. I injected you with a special serum of unicorn blood.”

“Why the heck would you do that?”

“You were dying, Mr. Dibbs. Modern medicine had failed you. You were the perfect candidate.”

“But what about testing the stuff? Lab trials? You know, injecting rats and stuff? Why jump to humans?”

“My dear boy, if we had not acted when we did, I dare say you would not have lived. There was no time for trials.”

“Many attributes have been ascribed to the unicorn, illusiveness, flight, healing and prognostication to name a few. It seems that some of these are accurate and some are not.”

“What does that have to do with anything?”

“We didn’t choose you, the unicorn did. He scratched your name on the wall of his stall before he died. We tried to honor his final choice.”

“We aren’t certain. We’ve only studied them a short time. We don’t even know for sure what they eat so keeping one in captivity was bound to cause some fatalities, but how else could we learn?”

“You couldn’t just watch them with your cameras?”

“It would have taken years to gather even the most mundane of information. When the opportunity came to capture one, we took it.”

“What kind of operation?”

“The kind daunting enough to capture a unicorn. 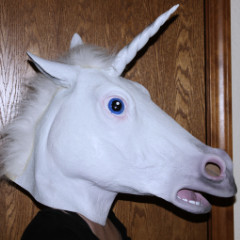