Long ago, during the Jurassic period, no one had any manners. You’d never find a dinosaur sharing his toys or letting someone else go first. Even Mommy and Daddy dinosaurs put their elbows on the table and burped during dinner. And no one, and I mean no one, ever said “Please” or “Thank you.” That is until Germinda Genevieve Giganotosaurus came on the scene (names were very alliterative back then). But she didn’t start as a manners maven, in fact she started out as quite the opposite. It’s not that she just lacked manners, though, it’s more that she was downright mean. She’d throw her toys at her friends and stick out her tongue at grown ups. She’d even call somebody names who’d just given her a present.

One day her mother, who loved Germinda very much despite how mean Germinda was, had had enough of Germinda’s antics and sent her outside to play.

Germinda stormed out. She had been enjoying putting makeup and hair bows all over, Alfred, the pet alligator, and she did NOT like being told what to do. Alfred, however, was very thankful for this turn of events.

Germinda went to her friend Terry Teranodon’s house, but Terry couldn’t play. Terry said she had to help her Dad clean the house.

So Germinda went to Benny Brachiosaurus’ house, but he said he couldn’t play either. He had to mow the lawn even though he had been putting the lawn mower away when she walked up.

Lastly she went to Veronica Velociraptor’s house but Veronica too couldn’t play. She said she had homework to finish.

Veronica looked down. “Well… The truth is Germinda,” she said, “you’re really mean and I don’t like playing with you.”

Veronica walked back inside. Germinda stood on the sidewalk and cried. In fact, she cried all the way back to her house.

She burst into her room, threw herself down on the bed, and sobbed, loudly, so that everyone in the house could hear.

A few minutes later her Mom, who’d been engrossed in the laundry, heard the sobbing from the basement and came to investigate. “What’s wrong, Germinda?” she asked.

“None of my friends will play with me,” Germinda said. “And Veronica said I was really mean!”

“Well…” said her Mom, trying not to immediately agree. “Let’s think about this. What did you do when Terry Teranodon came to play?”

“I stuck my tongue out at her and called her the queen of prissy pants.”

“Was that a nice thing to do?”

“And how ’bout when Benny Brachiosaurus came over?”

“I took his brand new truck and played muddy motor cross with it, crushing cars and plants under its tires of doom.”

“Was that a nice thing to do?”

“Probably not…” Germinda said, “particularly since he asked me not to.”

“And what about when we had Veronica Velociraptor over?” asked her Mom.

“I used the word ‘vomit’ in connection with her name and then, the next day, I got the whole school to call her that too. Then I held an election to elect her Prime Minister of Vomitalopolis while simultaneously running a straw man candidate of Vomitus Vicky whose vomiting credentials were nowhere near those of the ones I made up for Veronica so that Veronica would be the clear winner and take home the Most Vomitus award as part of her election victory.”

“That was very inventive,” her Mom said taken aback, but she recovered quickly. “But was it nice, Germinda?” She asked.

“Did you hurt Terry and Benny and especially Veronica’s feelings?”

“Yes, Germinda, the answer is yes. You most definitely hurt their feelings and were a very mean girl.”

She rubbed Germinda’s back. “The best part about life,” she said, “is that you don’t have to stay the same. You can make different choices. Each day is a new chance to do things right.

“Why don’t you sit here and use that inventive brain of yours to figure out how to fix this.”

After her Mom had left, Germinda started to cry once more, but this time not for her hurt feelings or because Veronica said she was mean, she cried because her mom was right, because she really loved Terry, and Benny and especially Veronica and had been mean to them, and because she could have been a good friend and wasn’t.

She sat there and thought for hours and hours and through the night, and as the sun came up she had an idea and decided to take that new chance.

Germinda published her book, Manners of Niceness, which everyone shortened to just “Manners”. She traveled all around the prehistoric world telling dinosaurs why they shouldn’t gargle their peas or fling mashed potatoes with their spoon or hold mock elections for imaginary positions in not very nicely named kingdoms. And to the end of her days she took her chance every morning to be the sweetest, kindest, and all around nicest dinosaur you’d ever meet.

One peer review of “How Manners Were Invented” 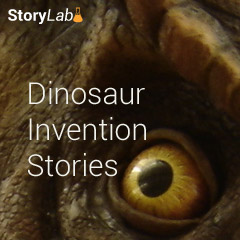