“Rolland! Stop!” Mama shouted, but, whether he heard the order or not, he didn’a listen. Rolland was a runaway train, listening to no one and nothing. Mama ran after him, even while the posse continued shooting.

She got behind him and jumped on his back. Pulling at the tubes and bolts with her hands. Rolland paid her no mind, as if she were a gnat buzzin’ round his ears.

“Lizzie,” she yelled, still clinging to Rolland’s back. “Get me a wrench!”

I ran for the barn and jumped through the hole Rolland’d made. Inside there were tools of all shapes and sizes. My eyes scanned the room for a wrench, something, anything to help Mama. I ran from one end to the other hoping she hadn’t taken them into the house or down the road to fix something else. Then I saw one on the operating table, the big oak table Mama had fixed Rolland on and stitched Papa up on. I grabbed the wrench and ran back through Rolland’s hole.

Then a scream rang out like a thunder-clap: Mama.

She’d been hit by one of the bullets. She fell off Rolland and into a heap on the ground. She was as still as a scarecrow on Sunday. But Rolland didn’t stop to help her and neither could I.

I ran up behind him as he grabbed the sheriff off his horse. He held the sheriff up off the ground by his neck. I jumped up and began working at anything the wrench could twist, turn, or mash. In a minute I’d disconnected three of his five steam hoses. Rolland dropped the sheriff, turned and looked at me. And then he just stopped, frozen. My betrayal still in his alabaster eyes.

We never heard Mama speak again. She’d been hit by more bullets than Doc Winters could find. Whether they were ricochets or otherwise we couldn’t tell. One grazed her head. Another tore up her stomach. She never woke. Doc Winters assured us she was in a better place. I can’t disagree.

Maggie ran away the night Mama died. We spent days searchin’ for her. We looked in rooms and outhouses, turned over stones, and splashed through streams. We called her name in windy and wild places, but we never heard anything more’n our own voices.

Finally, we found her back in the barn, in Mama’s old workshop. She looked so frail and small, among the tools and machines and inventions. She was curled in a ball and clutchin’ Rolland’s defaced breastplate, wearing it like armor. It was the only bit I could save when the Sheriff ordered me to dismantle him and took away the pieces. She held it tightly to her little body. When she saw us, she rose to her feet, and still clutching the breastplate, she stumbled through the hole Rolland had made. The three of us followed her out into the sunlight. 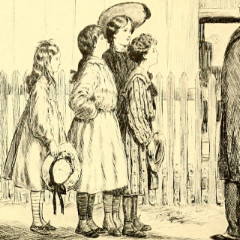