Stan spent the rest of that day bagging and cleaning the wool. As the sun went down he heaved the last bag into the barn where it’d be safe and dry till morning. He staggered back to the house and fell asleep on the dirty kitchen floor, tired, sore and happy.

The next afternoon, Stan borrowed his neighbor, Miss Julop’s, truck and loaded it up for market. Stan sold a bag at each of the sellers before unloading it all on a spinster and crafts maven who had built an empire of fine homemade goods. He made enough to pay his back mortgage and give them an advance of six months so they’d overlook his past indiscretions. And still he had enough to live on for the next few months.

Stan whispered a thanks to the Almighty as he walked out of the bank and got in the truck.

When he got home he went to the barn and hugged Colonel Sweater, much to the sheep’s dismay. Stan held on and the tears began to fall. Colonel Sweater, unable to get away, phased out, somehow made himself intangible, untouchable. Stan fell through his sheep onto the dirt floor of the barn. Colonel Sweater sauntered off like nothing had happened. After a few paces he turned back and bleated.

Stan went over to Miss Julop’s just to have someone to tell the story to. Once he mentioned the miracle, though, Miss Julop got a queer look in her eye. She adjusted her shirt and realized she had some pressing business to finish.

As the months progressed and more and more people got the same look in their eye as Miss Julop, Stan left the house less and less. He’d still work the farm (or what passed for him as working) and go to the grocery store, but the trips into town became less and less frequent. Even the members of the church he’d gone to when his father was alive steered clear of him and his miraculous sheep. He hadn’t paid much attention as a boy, but he knew they were supposed to believe in miracles.

One day the reverend stopped by.

The reverend had stood on Stan’s porch exactly three times before. Once when each of his parents died, and once, on one of his weekly visits to Miss Julop’s, when his car broke down.

“No, no, my son,” the reverend replied. “I’m here to see you.” The reverend extended his hand to shake. Stan stepped from behind the door and held out his own hand.

They shook. The Reverend held on tightly and examined Stan’s inner elbow.

“I haven’t seen you recently and the good Lord’s put you on my mind… heard some things, wanted to see how you were doing.”

The reverend put his hands behind his back and looked down. “Well, Stan, let’s not beat around the bush,” he said. He looked up at Stan. “I’ve heard some stories and I just wanted to come by and hear them for myself.”

They sat at Stan’s kitchen table, a pair of dirty water glasses between them. Stan told the reverend everything right down to the fact that he hadn’t peed once during the whole shearing episode.

At the end, the Reverend asked one question, “Stan, will you show me around?”

“Uhh… Sure,” Stan said. He would have done the standard tour, but at every closed door or pile of hay the reverend asked what might be behind it or above it or below it or inside it. The fifteen-minute tour extended into three hours of careful inspection.

At the end of it the reverend turned to Stan and said, “Well either you’re far better than I could have guessed or your crops aren’t here.”

“Umm… This is a sheep farm, Reverend. Ain’t no crops but in the garden and you inspected every plant already.”

“It’d be best if you just turn yourself in. A life of sin cannot last, Stan.”

“I ain’t sure I understand, Reverend.”

“I’m not stupid,” the Reverend said, “and neither are you. Your sin will find you out, but there’s forgiveness if you turn from it now.”

“Please know you can come to me with anything, and I will help.” He paused awkwardly and expectantly, like a small boy waiting for his mother’s goodnight kiss. “There is forgiveness.”

With that the reverend left and Stan felt more confused than ever.

That night, as he lay in bed, he began to wonder what it would take to make someone believe. If the reverend wouldn’t believe in miracles who else would? He turned over every angle in his mind and the only thing he could figure to change things was a demonstration. “By gum” he said out loud. “I’ll put Colonel Sweater on the stage” 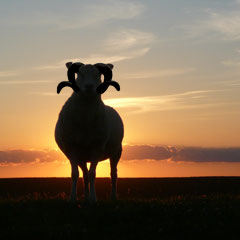