Over at the Christmas tree forest the fight had deepened and Minimous now openly challenged Magnus’ authority.

“You’ve never been picked, why should we trust your decorating style?” Minimous said.

“I have been helping trees meet Santa’s requirements for over one hundred years,” Magnus said.

“And yet you’re still here.”

“Quiet,” Magnus said. Enough authority seeped into his voice to quiet Minimous for the moment. And then Minimous heard it too: Jingle Bells.

“Well then, we’ll see what the big man has to say about your boasts.”

Just as Minimous said this it became quite clear that something was wrong. Santa’s normal, “Ho, Ho, Ho!” was replaced by “Hoooooooooo, Hoooooooo, Whooooooaahh!”

They looked toward the north and saw the sleigh flying erratically, headed straight for the Christmas Tree Forest. Rudolph led with eight colts floundering behind him, too young to handle the cross winds above the northern ice.

Minimous cried out as the sleigh crashed into Magnus. But Magnus did not shy away, he enveloped them with his branches. Taking the worst of the crash on his limbs, hoping to save Santa and the reindeer some pain. And his plan worked, though they crunched through much of his outer foliage and decorations. The deer all suffered minor cuts and Santa suffered a gash across his right arm, but all in all the crash caused little damage.

When Santa, the reindeer, and the sleigh had all been extricated from Magnus, medical care had been provided to all involved, and Magnus’ decorations had been salvaged as much as possible, Santa made an announcement.

“Let me first say a jolly thank you to Magnus who with sacrificial courage and, without fearing danger to life or limb, caught my reindeer and my slay. Courage and self-sacrifice like this is the true meaning of Christmas.

“All of you know of my yearly trip to pick an official Christmas tree. And though I’m sad to say it, I have not chosen Magnus.”

“He would do an excellent job,” Santa continued, “and his decorations are impeccable, or, at least, they were before my earlier accident. But I have a job for him that is far more important, far more critical to the success of Christmas. I need him to do what he had been doing for nearly the last century. I need him to watch over the forest and help the seedlings and saplings learn how to decorate themselves.”

He turned to Magnus. “I have never told you this, old friend, but I have relied on your wisdom and generosity of character for much of the last century.”

Santa touched Magnus’ trunk. “And it is with great gratitude that I now ask you to stay on as my emissary to this forest, my Ambassador to the forest. Will you do that for me?”

“Thank you,” Santa said. “I know the forest could have no greater caretaker.”

Santa paused, collecting his thoughts. “I have decided to do something different this year.”

Minimous stretched his limbs to hear. He knew that choosing a sapling would be something different.

“Truth is I don’t like the way things have turned out. I planted this forest as an example. A place Christmas trees around the world could look to and see what Christmas is all about… But you have descended to squabbling and lying and jockeying for position.” Santa blinked back tears. “I am disappointed with you… all of you…”

The trees bent their branches like willows. One sapling even let out a sob.

“I came here to take back a tree. To have a Christmas tree in my yard to celebrate with, and I’m not going to do that.”

Needles dropped from every tree, the equivalent of a human gasp.

“No!” Magnus shouted. “Please, Sir, take one. Everyone has worked so hard this year. Why, I don’t know that I’ve ever seen a better lot of Christmas trees-”

“What about Minimous?” Magnus asked, “His decorations are the finest here.”

“I have made my decision and it stands,” Santa said. “I will not take one of you back with me. I will take all of you.”

“Because Christmas is not about competition or great decorations. At its heart, it’s about getting something you don’t deserve… about love so big it can’t be contained and gifts so sweet, so honest, we can barely look to the sky and whisper thank you.”

Luckily the elves were well ahead of schedule because it took nearly two weeks to transplant the entire forest. And what joy it brought. Old friends were reunited. Parents saw what their seedlings had grown into. And siblings once again found themselves within branch’s reach.

That year the Christmas tree forest celebrated together, as a forest, as a family.

Magnus still drills his charges endlessly, and Minimous still fights to get out of Magnus’ shadow, but there is a new atmosphere of love and cooperation in the forest. Christmas does not just hang on their branches anymore, it has entered their roots, flowed up their trunks, down their branches and out to the edges of their needles. 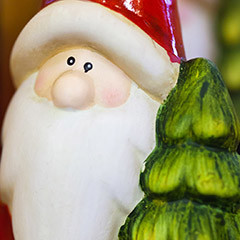