A portrait of Aunt Myrtle hung from a noose in our living room. The noose itself was just my father’s way of using whatever bits and pieces were about to do the task at hand. He also thought it’d be a nice conversation piece among visitors, if we ever had any.

Aunt Myrtle, my mother’s favorite aunt, had long black hair twisted together in a loose bun that spilled out the back in snake-like waves. Her eyes, my father assured me from meeting her at his wedding, were an odd, but normal green. In the picture, they were radioactive lights causing sickness and horror wherever they looked. Her nose was a large crooked boulder on top of which lay a large wart and over which those tiny iridescent eyes fixed on you with disapproval.

Aunt Myrtle’s ears were indistinct until you reached the lobes where they dangled to the envy of any continental soldier. Her mouth was tiny and tight, but allowed razor sharp teeth to peak through. And in that picture, such was the painter’s art that she seemed to breathe. I could not walk across the room without her chilly stare upon my back and fearing her crooked fingers—as I imagined they must be—grabbing the scruff of my neck.

My father received the portrait shortly after my birth and mother’s death. Feeling it one last link to the woman he loved, he gave it the place of honor in our living room and placed an old Rembrandt in storage. He often joked that the artist captured her truth better than a photo. My mother had told him many harrowing tales of her beloved aunt and the retribution she dealt out on anyone who crossed her.

One night when I was visiting home, Aunt Myrtle’s eyes flashed from the painting and she said, “Jeremiah.”

That is not my name, but it seemed inappropriate to argue with a portrait come to life—particularly Aunt Myrtle’s. “Yes?” I said.

Her eyes swept the room and then focused on me. Her hair writhed behind her and her nose twitched in time with her pulse as blood pumped through the thick wart. Keener and deeper than I’d ever seen them before, her eyes looked straight into mine as she said, “Your mother loved you.”

And then the eyes took on their painted fire again. Her hair wiggled back into brush strokes of movement. Her wart’s pulse slowed and stopped all together.

I crumpled to my knees. I held out my hand to touch her, but couldn’t bring myself to. If I’d felt the paint under my fingers I would have known it was false. Known it wasn’t real. And then I hunched into a ball and rocked back and forth until morning.

The next day my father took Aunt Myrtle down and brought the Rembrandt out of storage. For weeks after that I hadn’t the courage to ask him why, but when I did he stared off in the distance for a long while. He turned back placing a hand on my shoulder. Smiling through his thick mustache, he said “It served its purpose.”

Months later my husband and I had a son. When they brought me the squirming bundle of arms and discontent I held him close to my chest without the need of painted interference and whispered in his ear, “Your mother loves you, Jeremiah.” 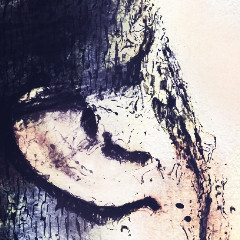