Xander hadn’t wanted to shove her out the airlock, but the risk was too high. They’d been friends, shipmates, lovers, and everything in between for the last decade.

“Stop crying,” she said, though Xander wasn’t sure whether she was talking to him or herself.

“Khrys, don’t make this harder than it has to be.”

The radio in her spacesuit squawked with solar interference.

“What? You sending me into space so I don’t take out half the ship?” she asked. “How hard could that be?”

“What other option do we have? You-you were the one who suggested it.”

“Khrys,” he said. His voice cracked. “That’s not fair. What if it went off? What about Cara and Ben? I didn’t go to some sketchy bar and get marked with a subcutaneous detonator.”

“You know we had to get the fuel and we couldn’t afford it anywhere else.”

“There are always other options.”

“Yeah,” she said, “like throwing your wife out an airlock.”

“It was more of a gentle push…”

“Yeah,” she said beginning to smile through her emotions. “You always pushed me away gently.”

He paused long enough for her to know that that comment had stung him. Both for the sentiment and the past tense.

“Can we get to work on finding the little bugger and get you back on board?”

“I thought you’d forgotten in the rush to get me out the door.”

She bit her lip to stop herself from lashing out again. All she wanted to do was apologize, but terror controlled her tongue. She couldn’t be sure what it would say.

He worked silently for a long time, using her suit’s scanners to try to find and deactivate the device. Pirates often used it as a ransom tool, getting people to give up money and property to save their lives. The ransom message had come in just under an hour earlier.

Every breath he took felt like an eternity and a reproach in her ears.

“Yeah?” he said in the way he did when he was only half listening.

“I want you to know that I love you too.”

“Khrys, there’s plenty of time, what are you planning?”

“I’ve held you down far too long.”

She unclipped her tether, but still held it in her hand.

“Khrys, stop! We’ll get through this. We always have.” He banged at the controls frantically. “Don’t let go. Please don’t let go.”

“Too late,” she said, and let herself float away.

Xander banged in one last command, grabbed his gun off the wall, secured his tether, sealed his helmet and took a flying leap out the airlock.

As he flew toward her, he splayed his arms and legs wide. He was upon her before she realized. As she tried to stop him, he wrapped his legs and arms around her.

“What are you doing?” she screamed.

“Saving our marriage,” he said.

He pulled out his gun, aimed the opposite direction of their ship, and fired. The projectile went one way and they went the other, hurtling back toward the ship.

“Xander! The explosive!” she yelled.

“Once I isolated its signal, I used the suits electrical monitors to jam the transmitter. We’ll have to remove it, but you can’t get blown up from a start system away.”

“I tried but you were too set on that noble death of yours.”

“It did get you all heroic, though.”

“I couldn’t let my best girl get lost in space.”

“I better be your only girl.”

He smiled and kissed the inside of his helmet where it touched hers. “My best girl, my only girl,” he said, “and the only one I’d ever throw out an airlock.”

One peer review of “Airlock” 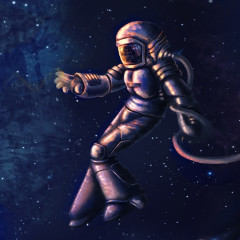