“The world has laughed at me,” said a short bespectacled man in a white lab coat. His hair was meticulously ruffled and his eyes were set at the exact width for elaborating on schemes of world domination. He stood in front of a large, sheet-covered object. “But I shall not suffer at their hands any longer!” he continued. “From now on they shall tremble and, possibly, if I’m lucky, scream with horror at the name… Dr. Loofapants!”

A gelatinous blob, his friends call him Blobby, cheered and shouted from the first row of an empty group of chairs. Beyond a few rats, who didn’t stay for the show, Blobby had had a hard time rounding up a good audience in Dr. Loofapants’ deep under-mountain Lair of Despair™.

A fifteen-foot tall stegosaurus robot stood upright on two legs.  The shiny black metal with red accents twinkled in the low light of the laboratory.

“It’s the Dinosaur of Death™(pending), Blobby. It’s not supposed to be pretty,” Dr. Loofapants said.

“And yet your aesthetic tastes have shown through quite well,” Blobby said. “Gold star!”

Dr. Loofapants sighed. “Just release it on the mild-mannered town below, please,” he said.

Blobby oozed over to the control panel. He pulled a lever and hit some buttons. A door opened in the side of the mountain.

“Arise, my creation!” Dr. Loofapants shouted. “and destroy the mild-mannered town below!”

The Dinosaur of Death™(pending) stomped off down the mountain.

“So, Blobby,” Dr. Loofapants said as he found his minion in the Lair of Despair’s™ TV Lounge, (his Evil Video Interface Laboratory™ (E.V.I.L.) Control Room was currently being remodeled). “How much destruction has my Dinosaur of Death™(pending) dealt?”

“News reports are just coming in, my esteemed mad scientist,” Blobby said as he switched to the news station.

The Active News jingle sounded and the local anchor came on screen.

“-everything in sight,” the anchor continued. “It didn’t stop with lampposts, shrubs and small children, no, it went on to take care of the middle-aged and elderly as well.”

The news anchor continued, “Residents have dubbed it the Hug-o-saurus because it’s so full of love… and hugs!”

“The Hug-o-saurus,” the news anchor said, “will be giving out hugs until at least midnight, but with the way the line looks right now, it might take a few days to give out all this love.”

“Did you set the behavior dial to ‘super evil’?” Blobby asked, “Or ‘sunshine and roses’? They’re pretty close alphabetically speaking…”

“If you’d like to be hugged by a giant, love-filled, robotic dinosaur,” the news anchor said, “and I know I’m getting in line, come on down to-” BLAM BLAM.  The TV fizzled and died.

“Hey!” Blobby said, “Gelatinous Disco was coming on next.”

Dr. Loofapants put his laser gun back in its holster and stormed off.

“Somebody needs a hug,” Blobby said.

Dr. Loofapants stood in front of a giant laser. He skipped the sheet this time (and the trademark paperwork).

“Open the doors, Blobby,” he said.

“Come to think of it maybe it is more of a switch,” Blobby said.

Dr. Loofapants reached toward his holster.

The cloud-seeding laser shot into the sky. The clouds over the mild-mannered town below immediately started producing snow, sleet, and hail.

“Bwa ha ha ha *hack* *cough* *wheeze* *choke*… I have got to do something diabolical to these allergies.”

Blobby sat in front of his duct taped TV set watching the local news. Dr. Loofapants came in as the weatherman began his report.

“Shooooooo-wweee,” the weatherman said, “Say goodbye to tree spores and spring, record snowfall today: five feet of snow in just under four hours. Lucky for us the Hug-o-saurus took a break from huggin’ to help out and clear the streets. We should rename him Shovel-o-saurus. By Golly, it’s business as usual thanks to him, just a lot more fun! It’s truly a winter weather wonderland!”

Blobby was quick on the draw and turned the TV off before Dr. Loofapants’ laser came out of its holster.

“Maybe you’re just not supposed to be evil,” Blobby said.

“Nonsense,” Dr. Loofapants replied, “The Loofapants have been mad scientists for centuries.” Dr. Loofapants whipped out his laser BLAM, BLAM and shot the TV for good measure (or evil measure, depending upon how you look at it). “Besides I have a Ph.D. in Evil.” He blew off the tip of his laser. “Soon those mild-mannered town folk will rue the day they first heard the name Loofapants!”

To Be Continued Next Week… 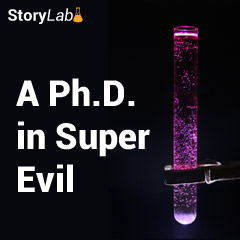