Experiment #37
Story Info
A professionally edited and fully designed version of this story appears in Story Lab Magazine Issue I. You can find it on the App Store, the Google Play Store, and the Amazon App Store

St. Peter unrolled a scroll and began to read.

Andrew looked at the cloudy floor and humbly nodded at each statement.

When St. Peter had read the last line, Andrew bowed his head and said, “Oh, Apostolic Father, forgive me, but, in the interest of accuracy, I believe you missed a few, paltry acts of charity.”

He rolled up the scroll. “I hardly know what to say,” he said.

“Please do not worry about it,” Andrew said. “Everyone makes mistakes.”

“It’s not that,” St. Peter said. “I don’t think I’ve seen anyone with such a long list of virtues-“

“You honor me too much, Your Grace,” Andrew said.

But Peter was not done. “I’ve never seen such a long list of virtues,” St. Peter said again, “From someone who knew Jesus so little.”

“He does not know you, friend,” St. Peter said.

“Perhaps there is a mistake,” Andrew said. “I believe the scroll was quite clear on my accomplishments.”

“I have served Him all my life. I have given everything to do as He commands.”

“What of the sick and poor that I cared for? What of the lonely and dying that I shepherded here? What of those who could not see His light save by my reflection of it?”

“And yet you knew him not. You longed for mansions and glory, and thought you could make it here on your own. You thought your actions, your works were the key of entry, but they are empty, worthless, contemptible even without knowing the true and living God. Jesus is the way. Jesus is the key. You cannot get here by yourself.”

“I followed the rules. You saw the scroll.”

“Screw you, Peter. I deserve this.”

St. Peter wept freely as he turned to one of the large angels beside him and nodded.

The angel and another stepped forward. With great care and tears in their eyes they picked him up by the arms and carried the kicking, weeping, screaming wretch toward an elevator shaft.

“I never smoked a day in my life! I never drank or even had sex because you asked and now you’re going to let that sinner in and not me? &%$# you, God and &%$# this!” he screeched.

“Your god is too small,” St. Peter said.

The angels pushed Andrew into the elevator and closed the door. His screams and thrashing and cries could be heard for a long time as the elevator car descended.

St. Peter wept for him the whole way down. “If only,” St. Peter said, “If only he had seen the grace that was staring him in the face.”

When the elevator stopped, Andrew was silent. His tears had dried and clenched fists were all that remained of his anger. The doors opened and he stepped out onto a firm and fluffy cloud. 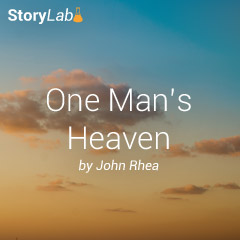